’s President Cristina Kirchner published an open letter to Prime Minister David Cameron, an ‘emotional appeal’, so described, for a return of the .  It comes on the hundred and eightieth anniversary of Britain’s supposed ‘seizure’ of the ‘Malvinas’ in January, blatant exercise, so she says, of nineteenth century colonialism.

I see from the pictures published in the press that this woman’s lips are thicker than ever, inflated by her addiction to Botox.  I think it may have begun to affect her intellect, which is thick and getting thicker. Is there any point, I wonder, in teaching monkeys history?  But for those a fraction more perceptive than Madame Botox, which I think will be just about everyone who stumbles this way, let me explain the simple facts.

Kirchner claims that “the Argentines on the were expelled by the Royal Navy.”  It’s rubbish.  To begin with the islands were barely inhabited in 1833.  The few ‘Argentines’ on the islands were allowed to remain.  In fact it was the remnants of a party led there in 1826 by one Louis Vernet, a merchant of Franco-German origin who came with a mandate from .  The ‘Argentines’ in question consisted of Vernet’s family and about forty English and German colonists.

Let the facts bite even deeper: , as we know it today, did not exist in 1833.  The country was then called the United Provinces of the River Plate.  It was only after it began the bloody conquest of , an exercise know as the Conquest of the Desert, that the present name was assumed.  That same conquest, incidentally, of a desert that was not a desert, was based on the wholesale extirpation of the indigenous inhabitants.  This is something that Kirchner may call to mind when she drones on about ‘colonialism.’

The 1850 Convention of Settlement, also known as the Arana-Southern Treaty, regulating relations between and , effectively ended that latter’s claim to the .  At the time Lord Palmerston, the British Foreign Secretary, said;

… a claim had been made many years ago, on the part of Buenos Ayres, to the , and had been resisted by the British Government. had always disputed and denied the claim of to the Falkland Islands, and she was not therefore willing to yield to Buenos Ayres what had been refused to . 10 or 12 years ago the Falkland Islands, having been unoccupied for some time, were taken possession of by Great Britain, and a settlement had ever since been maintained there; and he thought it would be most unadvisable to revive a correspondence which had ceased by the acquiescence of one party and the maintenance of the other.

So that, as they say, is that.  All Argentine protests were dropped.  The diplomatic realities were acknowledged by the Argentine leaders in their Messages to Congress in the 1850s.  The were not mentioned again for another ninety odd years in Congress, not until 1941, to be precise.

It’s also worth noting that the issue has come to the surface in the modern age, a continuing diversion away from ’s internal problems.  This is a nation that, unable to cope with itself, was continually beguiled by demagogues: military dictatorship at one turn, outright fascism at the next.  , in resisting the invasion of the in 1982, at least saved that benighted country from its own political stupidity.

There are bigger issues here going beyond arcane matters of diplomatic history.  Kirchner talks of ‘colonialism’, seemingly without having the first idea what the word and the practice means.  The Falklands, as the Foreign Office pointed out, are not a ‘colony’ but a self-governing .  The have their own government and the three thousand odd inhabitants a complete right to self-destination.

This March the Falklanders will be asked in a referendum if they wish to continue their present status as an .  Personally speaking I would offer them a further choice – full political union with the , in the same fashion as some of the departments of located in the .  That would settle the matter once and for all.  Any future attack should be regarded as an attack on itself.

The truth is that Kirchner, in protesting against ‘colonialism’, would treat the people of the in a thoroughly colonial way.  What arrogance in the modern word to assume that the native inhabitants of a place can be ignored and disposed of by other powers.  Commenting on this the Foreign Office said;

The people of the are British and have chosen to be so.  They remain free to choose their own futures, both politically and economically, and have the right to self-determination as enshrined in the UN Charter.  This is a fundamental right for all peoples.  There are three parties to the debate, not just two as likes to pretend.  The Islanders can’t just be written out of history.  As such there can be no negotiations on the sovereignty of the unless and until such time as the Islanders so wish.

So there!  Poor Madame Botox; there she is, desperate to divert attention away from her own internal problems by raising this issue yet again to no purpose whatsoever. She fires letter in the way that her fascist predecessors fired bullets.  Letters or bullets it makes no difference.  The day that the people of the Falklands decide to join Cristina’s failing republic will be a cold day in hell...and in . 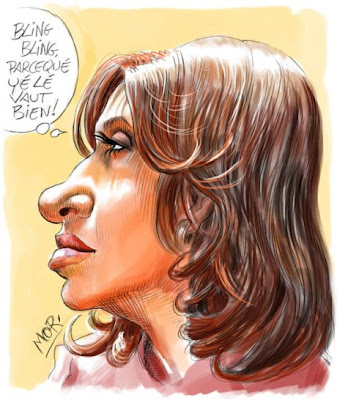