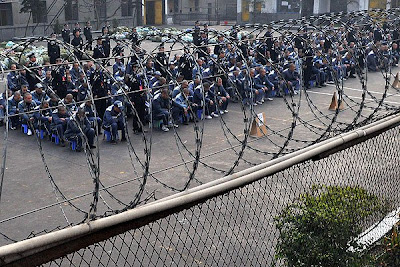 Last August, in China’s Hunan province, a woman by the name of Tang Hui was sent to a labour camp, sentenced to eighteen months‘ re-education’ for “seriously disturbing the social order and exerting a negative impact on society.”  Why, you may wonder, what was her crime?  Simply that she had repeatedly petitioned officials, saying that the sentences passed against the men who had kidnapped, raped and forced her eleven-year-old daughter into prostitution should have been more severe.

Times have changed, even in .  In times past Tang Hui would simply have vanished into night and fog.  In times present thousands went online to protest on Sina Weibo, the Chinese version of Twitter, which really is turning into the true voice of the people, protesting against the corruption and complacency of the country’s communist oligarchy.  She was released but the protests against the obvious injustice of the legal system have not gone away.

It was Mao Zedong, one of history’s most revolting tyrants, who set up ’s ‘reform through labour’ system, known as laojiao, in 1957.  It was a way of dealing with people who had offended the communist authorities, all the better since it did not involve the inconvenience of any form of due process.

People can be locked up for four years simply on the whim of some petty official or other; in the past because they were supposedly ‘counter-revolutionaries’, in the present because they are perceived to be a nuisance.  At a conservative estimate some 160,000 are said to be languishing in laojiao labour camps.

The paradox of Chinese communism is that it reproduces, in its own unique way, the abuses of the Ancien Régime.  Yes, indeed.  Those of you have read Charles Dickens’ novel A Tale of Two Cities may recall the fate of Dr. Manette, imprisoned in the Bastille by means of a lettre de cachet.  These documents, often issued blank, with a name to be added later, were used by the powerful to imprison people without trial or an opportunity for defence.  Laojiao is possible the closest thing the modern world has to lettre de cachet.  But the various Bastilles it supports are far fuller than they ever were in the good old bad old days in .

Things move slowly in when they move at all; politically they move with all the urgency of a glacier.  Earlier this month a senior legal journalist claimed in a microblog that the government was getting ready to abandon the whole system.  Soon after laojiao consigned his tweets to silence.  Instead Xinhau, the official news agency, said that the government would “advance reforms” this year.  Yes, well, I think we all know exactly what that means.

Soon after the release of Tang Hui a poll of some 20,000 internet users recorded a 98% verdict in favour of abolition.  I can’t be certain, of course, but I imagine the 2% who voted in favour are placemen and stooges of one kind or another.  No matter; for the poll was deleted, causing some to remark that it too had been sent to a labour camp.

Tang Hui was lucky; her case attracted public attention, too many people to be sent comfortably off for ‘re-education through labour.’  But there are many thousands still languishing in camps, fellow petitioners, House-church Christians and others who have attracted the eye of disapproval.  It’s simply a way of silencing any form of dissent by those who don’t really qualify for the big Dissident label.  No, these are the petty people, the little people who can be incarcerated often just to settle a local vendetta.