Get Back to the Chickens and Pigs 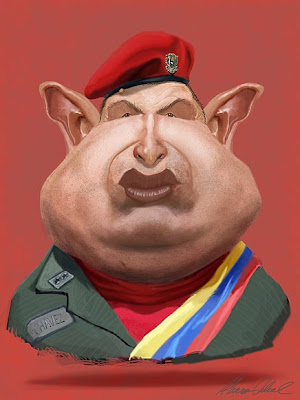 On Thursday ’s Hugo Chavez is scheduled to be sworn in for yet another presidential term, unless Jesus Christ, “the greatest socialist in history”, decides that it is time for him to join the people’s commune in the sky.

The ostentatious riches of the Chavez family in Barinas, the state where he was born, and where his brother Adán is governor, stands in non-socialist contrast to the poverty of most of the local people.  The old family home, once a small chicken and pig farm, is now a sprawling state-of-the-art ranch, a sort of Venezuelan version of South Fork.

In the state capital, also called Barinas, the family has a luxury mansion in a high-walled compound in one of the city’s most exclusive districts.  They are to be seen travelling around the place in heavily-armed SUVs.  According to opposition figures, the clan owes a further twenty estates throughout the province.  Elena Frias, the president’s mother, has an ostentatious taste for the better things of life, including designer clothes.  Viva la Revolution!

If Elena and the rest of this grubby and nepotistic shower are worried by the expected death of the golden goose they can’t be nearly as worried as his thuggish allies across the region.  There is the Castro regime in , desperately trying to keep the demagogue alive on life support, just as he kept their regime on life support for years now with cheap oil.  There is the semi-literate Evo Morales, president of , whose crack-brained political schemes, all supported by rent-a-mob, have been underwritten by Comrade Chavez.

In all Chavez has spent an eye-watering trillion, yes trillion dollars in state funds to support foreign allies, his family and all his other domestic political hangers-on, including the ‘Boligarchs’ – oligarchs who have flourished under the so-called ‘Bolivarian Revolution’ - , the sort of greedy and self-serving gangsters that are such a feature of Vladimir Putin’s Russia.

Meanwhile , with some of the richest oil reserves in the world, has gone step by step down the primrose path to economic ruin.  The cupboard is bare.  Chavez’ critics say that the very fact that he has repeatedly sought medical treatment in over the last eighteen months for his recurring cancer is a damming indictment of his stewardship of .

Damning indeed.  A country that should be floating on oil revenues is sinking under a surging fiscal deficit.  Inflation is out of control.  The overvalued Bolivar, the national currency, is sliding on the black market.  The country’s debt, now standing at an estimated $160billion, has increased five-fold under Chavez.  The economy has been crippled by the price and currency controls that are such a favoured feature of state socialism.

Chavez is dying of cancer.  is dying of cancer too, the cancer of socialism.  This disease has such a predictable pathology, always resulting in the inevitable outcome of ruin, necrosis and decay.  Intelligent people recoil from it in horror.  But then intelligence was never one of El Jefe’s virtues.  There may – thank goodness - be no hope for him.  There is, perhaps, hope for , once this appalling demagogue is off the scene and his corrupt and venal family have been dumped in the dustbin; once Elena and her dreadful progeny get back to the chickens and pigs.