Castles made of Sand 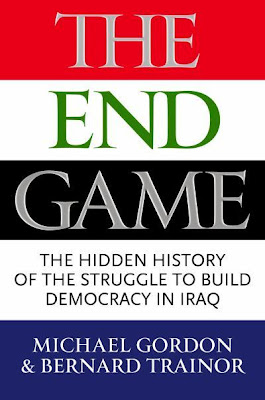 There is a Japanese proverb which goes “Vision without action is a daydream; but action without vision is a nightmare.”  It serves, so far as I am concerned, as the prefect epitaph for the Second Iraq War.  I cannot conceive of any action in either American or British history more abysmal than the 2003 invasion of .  It was a monumental error of judgement, the consequences of which are likely to remain with us for generations to come.

It perplexes me that anyone can have a good word for Blair; it perplexes me why people are not angrier over the damage he and Gordon Brown, his Chancellor and successor, did to the strategic and political interests of this country.  Quite apart from their other sins, Blair and Brown, the two Bs, bear joint responsibility for possibly the worst military humiliation in British history.  I’ll elaborate on this point a bit later.

, of course was essentially the third B’s war, the B in question being George W. Bush.  I’ve not long finished The Endgame: the Inside Story of the Struggle for , from George W. Bush to Barack Obama by Michael Gordon and Bernard Trainor.  This important book is essentially a history of American involvement in , which probably means that it will have a more limited readership in .  If so this will be a pity, for the authors have important and uncomfortable things to say about British involvement also.

Although The Endgame, as the title suggest, purports to be an account of the final stages of the war in Iraq, it’s actually a very good narrative of the course of the entire conflict, exhaustive in its attention to detail.  The authors, who work for the New York Times, are military specialists rather than professional historians.  In some ways this accounts for both the strengths and weaknesses of their book.

As a blow by blow inside view of the military and strategic challenges faced it’s a superlative chronology.  Unfortunately Gordon and Trainor have left themselves little time to stand and stare, resulting in a weakness in analysis.  Still, given the range of resources used, including classified cables and personal interviews, The Endgame is bound to serve as an invaluable mine for future generations of historians.

War, as Carl von Clausewitz observed, is the continuation of politics by other means.  If so, the political comprehension of Bush and Blair was utterly abysmal. It was the soldiers on the ground, as well as the Iraqi people, who suffered as a consequence of their ignorance.  To slightly adapt the Roman historian Tacitus, in invading Iraq the American president and the British prime minister made a desolation and called it democracy.

There were a whole series of political, cultural, religious and historical factors that should have urged caution.  Saddam Hussein was a wicked despot; of that there is no doubt.  But to believe his removal would lead to a brave new world of freedom and democracy is stunningly naïve.  The truth is that is not so much a nation as a hornet’s nest.  The invasion of 2003, with little in the way of forward political planning, simply set the hornet’s buzzing.  The West won the war only to lose the peace.

The only virtue in Bush is that he kept his nerve and listened to his military specialists.  With the situation almost out of control, the President committed extra fighting forces, ably commanded by generals David Petraeus and Raymond Odierno.  The so-called ‘surge’ of 2007-8, the account of which is at the heart of The Endgame, effectively broke the back of the al-Qaeda led insurgency.

The surge was important in recovering the honour of the military; it was even more important in winning over Sunni tribes, disgusted by the extremism of al-Qaeda, their former shield against Shia extremists, and the foreign fanatics it had introduced into the country. As Gordon and Trainor say of the surge, it was a military event that succeeded beyond any reasonable expectation in tamping down sectarian violence and breaking the back of both Sunni and Shia terrorism.

The relative success of the American surge stands in sharp contrast to British performance in the south around the city of .  In time to come I am convinced, as I suggested above, that what happened here will stand alongside the most serious defeats in British military history.  It was more than that: the British Army was humiliated.  The fault is not that of the soldiers, who did their duty in the most extreme circumstances, but sections of the senior command.  The fault, above all, is that of Blair and Brown, who gave the army a task and then starved it of the resources that would have ensured its successful completion.

As the Americans reinforced , the British withdrew from , leaving it to murderous anarchy.  As the Americans successfully negotiated with Sunni leaders, the British surrendered abjectly to the Shia fanatics of the Mahdi Army.  The appeasement did little good.  Even in the base around airport, British troops came under sustained mortar and rocket attack.  The insurgency in the south was only broken after Petraeus sent American forces to back up the regular Iraqi army.  Meanwhile the British division commander was off in for a spot of skiing.

The authors rightly blame the timidity of the British government for the fiasco.  But the chief political culprit of The Endgame is George W. Bush’s successor, President Barack Obama.  This was not his war, as he was quick to demonstrate in coming to office in 2009.  The chief focus on the 'war on terror' (what a disaster that has been) was shifted away from and back to .  American troops were gradually withdrawn from the former with the result that all the gains of the surge have effectively been squandered.  Now al-Qaeda is back; now uses Iraqi airspace to send military support to the beleaguered President Assad in .  All this effort, all those lives for what exactly? – for precisely nothing.  Castles made of sand slip into the sea eventually.