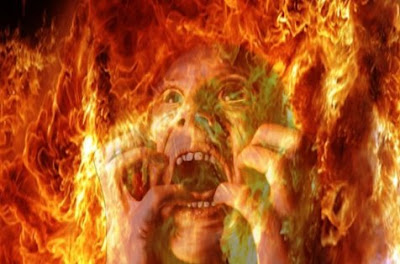 The Christmas double issue of the Economist was hellish.  There is nothing unusual in that, you may conclude; this publication is usually hellish in one way or another.  Abandon hope all you who read here!  Actually it was hellishly good, or at least there was a hellishly good article on hell (Into everlasting fire), helpful accompanied at the end with a traveller’s Rough Guide.

There was no by-line, so I do not know who to thank.  Perhaps it was a collective effort by Economist imps, specialists in Pandemonium.  Well, specialists in getting things wrong.  Yes, indeed, this is the paper that brought us ’s Mohammed Morsi by appointment!  Oh, never mind the hell of under the Brothers; let’s get back to hell.

Hell has a history, a somewhat cyclical one.  Those ancient Greek and Roman sages were rather contemptuous of the whole idea.  said that not even old women believed it anymore and Seneca thought it was a fable for underage boys.  It was Christianity that revived the hothouse, adding a touch of fire and a dash of brimstone, a sort of fork pronging the terrorised into belief.

Now hell is other people, Jean Paul Sartre said, a wholly understandable observation to those of us who have been trapped in the London Underground in the summer, or supermarket checkouts, or department store sales.  Hell is being made to sit and watch comedians and celebrity specials on Channel Four!

Those of us who have travelled in ’s Southern Bible Belt will know that hell for some people really is hell, not a metaphor but an actual place, with the fire, the forks and the forkers.  “Hell is real”, periodic billboards announce.

Those of a less certain frame of mind than Baptist fundamentalists are not quite so sure.  The limply defines hell simply as a state of absence from the love of God.  Not so the Catholic Encyclopaedia, which is rather given to the old time religion: it’s good enough for them.  Apparently only atheists and Epicureans do not believe in hell!

Hell, as the Economist says, was for hundreds of years the most fearful place in the human imagination.  It is also the most absurd, as Cicero and Seneca recognised.  Humanity has been adept at devising all sorts of frightfulness over time, massacre, degradation, suffering and torture in every imaginable degree, even a few that are not imaginable.   It really is the most awful cheek to attribute the ultimate frightfulness to God! 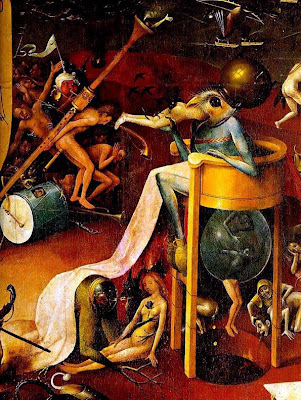 The traditional view of hell, as a place of everlasting torment, was clearly created in our image not God’s.  How on earth, or how in hell, the dilemma goes, can a loving God inflict everlasting and gruesome torment on his errant creatures with no possible hope of redemption?  The worst thing of all is that hell, according to some theological interpretations, was already in existence before the creation of humanity, a sort of everlasting ready to receive cattle trucks full of those unwanted by heaven.   In death at least brought release.  In hell there is no release.

Much of our image of hell is drawn not from the Bible but from the poets, two poets in particular – the Catholic Dante and the Protestant Milton.  In the Divine Comedy Dante describes a hell of nine circles.  But hell is a place of many more mansions than that.  In Burmese Buddhism there are – wait for it – no fewer than 40,040, one for each particular sin, sins like chicken selling and eating sweets with rice.  My goodness, eating sweets with rice – the horror!, the horror!  Pregnant women really do need to be mindful of those cravings.

And so it went on, the burning, the screaming, the flaying, the eating alive by demons, all the excruciating tortures that the human imagination could devise, at least it went on until the seventeenth century when it vanished in a puff of rational smoke. Rene Descartes, who thought therefore he was, thought that the soul was immaterial and thus beyond pain.  Now we turn full circle, all the way back to Cicero, who wrote that “It is but our own fraud which frightens us; it is our own evil thoughts that madden us.”

Hell is not other people, you see; hell is oneself.  “I sent my soul through the infinite”, Omar Khayyam, declares, “some message of that afterlife to spell, and by and by my soul returned to me, saying ‘I myself am heaven and hell’”  This is a view echoed in Milton’s epic Paradise Lost, where Satan, recast as the first and greatest rebel in history, says “Which way I flie is Hell: my self am Hell/The mind is in its own place, and in itself/Can make a Heav’n of Hell, a Hell of Heav’n.”

So you’ve always wanted a holiday that never ends?  Hell, as the Rough Guide says, is your first resort and your last.  Oh, don’t bother with the sun cream.  The jabs, moreover, are helpfully provided by our on site representatives.  You are guaranteed a helluva time. 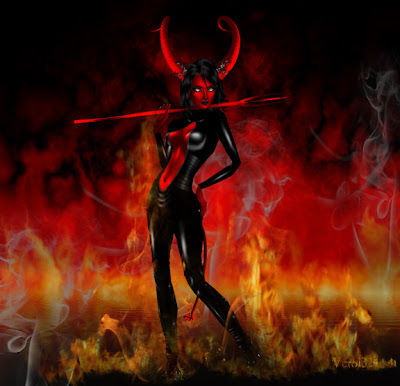