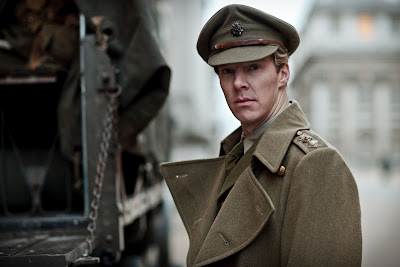 For the last two weekends I've almost given up my usual Friday social whirl.  Why, you ask?  Simply because I've been seduced and beguiled by the BBC's adaptation of Ford Maddox Ford's novel Parade's End.  It's brilliant television, with an excellent cast and a hugely impressive script by Tom Stoppard, all the more impressive given the complexity of the novel (actually its four novels in one).  If I describe the production as Downtown Abbey for grownups that might give you a little flavour.  It's Downton Abbey in that it covers much the same period, but Parade's End is as clever and commendable as the former is risible and second rate.

Actually my engagements were too pressing to forgo, so thank the gods for iPlayer, knowing that it was there waiting for me to savour at my own leisure.  And how I savoured the delicious Benedict Cumberbatch as an eatable Christopher Tietjens, the book's saint-like and suffering hero.  I would have watched it simply for his beautiful English, for those wholly delicious vowel sounds, unpolluted by dirty estuary waters.  But along with that comes a performance just as immaculate as his speech.

That would be well enough, but the second barrel of the gun is Rebecca Hall playing his wife Sylvia, just as excellent in every way, cool, detached and calculating.  While the other characters are not quite in the same league as these two, they are only a shade or two short of superb, especially Roger Allam as General Campion and Adelaide Clemens as Valentine Wannop, Tietjens’ lover who is not a lover, because circumstances have a fortunate tendency to postpone consummation! 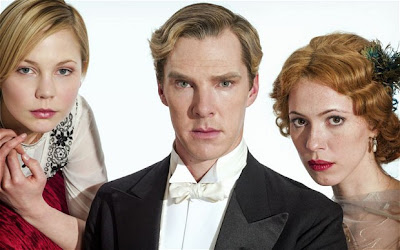 I actually started Some Do Not... (yes, the three dots are in the title), the first of the quartet, a couple of years ago but then was sidetracked by other things.  I took it down from the shelf to see my place marker still there, some sixty pages in.  I so regret not persevering at the time, which would surely have added to my enjoyment of the television drama.  I intend to make good soon, just as I intend to order the series when it comes out on DVD.

Christopher Tietjens, as I say, is a kind of saint; Sylvia Tietjens a kind of devil.  He is Saint Anthony; she is the demon sent to taunt him.  With the action opening shortly before the outbreak of the First World War, we are introduced to Tietjens as 's last gentleman, a Tory, as he describes himself, of an exact type.  With his standards of decency and impeccable code of honour he is out of place in his time.  He would have been even more out of place in our time, set against a moral and political caricature like David Cameron, a Tory of a wholly inexact type.

Sorry; I'm getting away from the point.  Tietjens is out of time.  His time, be believes, was the seventeenth century, "the only satisfactory age in ."  Actually he would have been just as out of place then as in his Edwardian twilight.  A victim of social malice, he would have been an even greater victim in the morally debased court of Charles II, a place where it was as well to take religious conviction and personal probity so far and no further.  I just imagine the saintly Christopher set against a notorious rake like John Wilmot, earl of , whom Sylvia would surely have taken as a lover!

And she does take a lover, less for the pleasure it gives her (she actually treats the benighted man as a bit of a joke) and more for the pain it gives her husband.  If he belongs to the past she is very much is a girl of the present, or even the future, anticipating the racier standards of conduct that were to follow the War.  Despite her adultery (he is not even sure if his son is his) Tietjens refuses to divorce her because, well, gentlemen don't do that.  She can, if she wishes, but she won't because she is a Catholic, a very flexible Catholic, I should add, mindful of the interdicts against divorce, ignoring those against adultery.  But they complement each other beautifully, just as Cumberbatch complements Hall.

He is a masochist; she is a sadist. The more he suffers, the more she tortures, almost ruining his reputation and standing in society in the pursuit of her whims.  The paradox is that he is the only man whom she admires, the only grown up, such a contrast with her lover, the ridiculous and melodramatic Potty Perowne, well played by Tom Mison in the Beeb adaptation.  There was a really amusing scene in the most recent episode set in during the War, Christopher now being at the front.  Potty is in the same hotel.  Sylvia has denied him sex, her room locked against his urgent pleadings.  She tells him that it will be unlocked on this particular night, though he may not like what she has to offer.  He doesn’t - box in the ears from Christopher, who also happens to be there!

This episode, the penultimate, concluded with a terrific scene between Tietjens and General Campion, a man who has acted as his frustrated protector against all the forces that would pull him down.  Now he has no choice but to send him to almost certain death at the front.  "What is a man to do when a woman is unfaithful, sir?” asks Christopher "Divorce the harlot", the general replies, "Or live with her like a man.  What sort of fellow wouldn't see that?”  Christopher falls back on his antique standards "There used to be, among families, a position...a certain...call it parade", he manages to say.  "Was there?", returns the general, "Well there are no more parades for that regiment.  It held out to the last man but you were him."

I shall be sorry to see this parade end.  I expect it will be some time before I almost stay in on Friday night again.