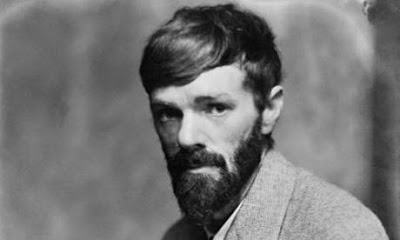 I was asked recently for my view on the writer D. H. , particularly in reference to his perception of women.  This is my view, uncompromising in my inimitable, no prisoners fashion.  If you admire and his writing what follows comes with an apoplexy warning!
Sons and Lovers was one of the set texts in my English Lit class at high school, really my first acquaintance with . I didn't like it at all. More than that - I hated it. But, since it's wrong to judge a writer on the basis of one book, I persevered, reading Women in Love and Lady Chatterley’s Lover, as well as some of his shorter fiction.

Evelyn Waugh said that could not write for toffee, which is far too mild a criticism; he could not write for anything. As far as I am concerned he is a complete literary fraud, one who managed to achieve a fashionable notoriety. His prose is cloying, indulgent and wholly inauthentic. I've likened it to wading through treacle. I particularly despise his bogus metaphysics, his soft-soap spirituality. I remember in Sons and Lovers stumbling over 'soul' in every other sentence, as if using the word ad nauseum somehow gave his writing soul. It most assuredly did not.

I'm getting away from the point, which is his perception of women. He knew absolutely nothing about women. His understanding of feminine psychology is impoverished in the extreme, rather odd in that he gave women a leading part in a number of his books. But these are not women as women; these are not people as people. They are manikins; women reflected through a particular set of male attitudes; women there, if you like, not in their own right but to affirm and reassure men. They are objects, not subjects.

Let's look specifically at Lady Chatterley’s Lover. Poor Connie; a sexually impotent husband and a brutish lover like Mellors the gamekeeper, a sort of avatar of Lawrence himself. For all its explicit sexuality it's a completely unerotic book, as lifeless as the products of modern day pornography. Women only exist as submissive chattels. If they are in any way sexually assertive, well, then, they must be lesbians. Otherwise it's lie back and think of ; no love, no passion, no intimacy, no tenderness; just pointless animalistic thrusting.

Is it really a surprise that the only intimacy Mellors is able to achieve is when he is sodomising Connie? And as far as Connie's own attitude towards sex is concerned you have the Mellors/Lawrence commandeering her point of view: "And how, in fear, she had hated it! But how she had really wanted it." There you are - the literary justification for rape. No really does mean yes.

Then there is Mellors wife, who can only get sexual satisfaction through masturbation. He, in his disgust, "took her by the neck and squeezed the life out of her." You see the only women who get satisfaction out of sex, according to Mellors and Lawrence, are black - more like animals -, but they are a turn off for white men because they "look like mud." Quite frankly there is more sexual sadism than love in 's oeuvre. He knew nothing of women and less of love. He is the last person I would trust to say anything meaningful about real women and real love.

I hope in time more and more people will understand just what a phoney he was, just how worthless most of his writing is insofar as it touches on genuine human feelings and emotions. There is a lot of soul, though.

I wrote about him here a couple of years ago, a piece I headed A Load of Balls (November 4, 2010), which really sums up my view. And here is my summing up -

The thing is I think is a grossly overrated writer. I’ve read his main novels, beginning with Sons and Lovers, and I’ve hated them all; hated his overripe metaphysics, his bogus and insincere spirituality, his inflated and unlikable characters and his florid use of language. There is nothing in Lady Chatterley’s Lover that could possibly ‘deprave and corrupt’…it’s just an overblown mess, a bad book by a second rate writer. All the naughty words, all the ‘arse’, ‘fuck’, ‘fucking’, ‘shit’ and ‘balls’ will never make up for the fact that Lady Chatterley, like the rest of this unpleasant man’s canon, is, well, a load of balls.
The prosecution rests.
Posted by Anastasia F-B at 16:15