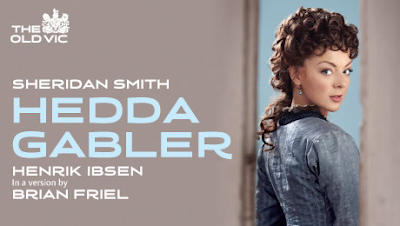 When I was little we had a dressing up box in the playroom.  For me this was a dragon’s horde of old clothes and shoes, things that mother no longer wore, things I could adapt to my own imaginative ends.  It was such fun.  I used to clunk around on footwear several sizes too big, dragging the tail of some long dress or other behind me!  It was fun pretending to be what I was not, bigger than I was.

I went to ’s on Saturday more or less to see an actress doing the same thing, pretending to be bigger than she was, draped in a costume several sizes beyond her.  The play was Ibsen’s Hedda Gabler and the actress was Sheridan Smith.

I should make it clear straight off that for me the play is the thing.  That’s what I went to see, not Sheridan Smith, apparently unlike a number of people in the audience.  Hedda Gabler is one of my favourite dramas.  The central figure, Hedda herself, is a complex character, who weaves a tragedy, partly out of frustration and boredom, partly out of malevolence and spite.  She is at one and the same time a victim and a perpetrator.  For me she is another dimension of Flaubert’s Madame Bovary, except she is Madame Bovary with brains.

Her dilemma is the same as Flaubert’s bathetic heroine: she is full of romantic sensibility while married to a commonplace mediocrity.  Otherwise Ibsen’s femme is a fatale contrast.  While Emma Bovary is stolidly petty-bourgeois, Hedda is full of aristocratic hauteur.  The daughter of a general married to Jørgen Tesman, an insufferably dull academic, Ibsen emphasises her independence by allowing her to retain her maiden name.  She is her father’s daughter, not her husband’s wife.

The one thing that Sheridan Smith assuredly does not have is hauteur, aristocratic or otherwise.  She is more Bovary than Gabler.  Actually I had another part in mind for her as I watched her strut and fret her hour or two upon the stage – that of Eliza Doolittle in Bernard Shaw’s Pygmalion.  She was really a lot worse than she aught to be!  But, my, how she has shot up, from such delights as the musical Legally Blonde and telly sitcoms like Two Pints of Lager and a Packet of Crisps and Gavin and Stacey, shot up, well beyond her talent and her capacity

She was clearly selected for the lead in Hedda Gabler, a play which she disingenuously admitted in interview that she had not previously heard of, because of her star rating.  It was most certainly not for her star quality.  She was simply too little for the part, a littleness that even carried touches of comic absurdity, like me in mother’s shoes.  Quite simply she could not occupy Hedda's spirit, causing many of the nuances and all of the subtlety to be lost.  In short, she was hopelessly out of her depth, the depth being Two Pints of Lager and a Packet of Crisps.

Then there was the play itself, a new interpretation by Brian Friel, the great Irish dramatist.  Great?  Well, he has to be; it said so in the Daily Telegraph!  And here is a measure of his greatness, a sort of free-flowing English that I feel sure Ibsen would have loved – “What a corker, as I think the new-fangled American expression is.”  Yes, indeed, what a corker.  It takes real greatness to produce a great line like that!

Oh, being super bitchy tonight, a real Gabbler, bored by timidity and littleness.  It wasn’t all bad.  Actually most of the cast were really quite good and some even better.  Special honours go to Adrian Scarborough as Tesman, Hedda’s devoted husband, devoted also to researching the domestic crafts of medieval .  Simply thrilling!  Daniel Lapaine was reasonable as Ejlert Løvborg, Hedda’s old amour and her husband’s chief rival, and Darrell D’Silva was on top form as a sinister Judge Brack, her would be amour.  But the real star, certainly the real female star, was Fenella Woolgar as Thea Elvsted, Løvborg’s new love and bourgeois amanuensis.

But these were just fragments that simply gave no coherence to the whole.  Without a strong Hedda, the spider weaving the web, the play just falls flat, sluggish and underpowered, with all psychological tension and insight lost.  For me the whole thing was just hopelessly one-dimensional, the greater the pity because, as I say, Hedda is one of my favourite female parts.  The other is Strindberg’s Miss Julie.  I should have gone to see Juliette Binoche play her in the new French production at the Barbican instead, if only my French had been up to the experience!
Posted by Anastasia F-B at 16:54