No Gold at the End of the Rainbow 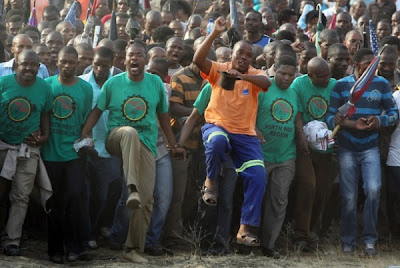 When I think of the new , Nelson Mandela’s so-called Rainbow Nation, the South Africa of President Jacob Zuma and the African National Congress (ANC), George Orwell’s novel Animal Farm comes to mind.  The ending is most pertinent;
No question now, what had happened to the faces of the pigs. The creatures outside looked from pig to man, and from man to pig, and from pig to man again; but already it was impossible to say which was which.
Look away of the old apartheid nation; look from the faces of the white Boers to those of the black Bores of the ANC; long since it has been impossible to say which is which.  One form of oppression and corruption has simply been replaced by another form of oppression and corruption.  The old East European joke comes to mind.  Capitalism is the exploitation of man by man; socialism is just the reverse.  Practically speaking skin colour is quite irrelevant.  ’s new black masters stopped the gravy train, as has been said, only for as long as it took to get onboard.
Last month thirty-four rioting workers at the Marikana platinum works were shot dead by police, the worst incident of such violence since the fall of apartheid.  I suppose there was some comfort in the fact that 270 people were subsequently charged with their murder.
What, 270 policemen; so many?  No, they were not police; they were miners caught up and arrested in the same riot.  They were charged with murder under a bizarre ‘common purpose’ law, a legislative hangover from the good old bad old days.  The crazy rationale here is that, by their actions, they ‘provoked’ the police into firing and were thus responsible not just for the death of their colleagues but their unlawful murder.
It’s caused a bit of a fuss.  The charges were raised by the National Prosecution Authority (NPA), a wholly ‘independent’ body.  Of course it is.  When lawyers acting for the accused went to see President Zuma, urging that the charges be dropped, they were told that it was not up to him to tell the prosecution service what to do.
It’s certainly up to somebody.  No sooner had the lawyers left than it was announced that the detained miners would be released in batches, proceedings taken up and just as quickly discarded.  But the anger just grows and grows, the dispute itself a festering sore, not just at Marikana but at mines elsewhere in .
The strikers at Marikana want better pay and conditions (they live in townships no better than the old days), but at least they are paid.   Not so the workers at the goldmine, who have received no wages for two years, yes, two years, because of a liquidation dispute.  The mine was partly owned by Khulubuse Zuma, the president’s son, and Zondawa Mandela, Nelson Mandela’s grandson.
Meanwhile, Julius Malema, the former youth leader of the ANC, expelled from the party (that’s the operative word) for his outspoken criticism of Zuma, has been busy mining some political capital.  This notorious black racist, an admirer of Zimbabwe’s Robert Mugabe, has announced, to all who are prepared to listen, that the white mine owners have co-opted a small elite of corrupt blacks to be allowed to remain in charge.
Ah, yes, the pigs, you see, black and white.  The thing is Malema, who may very well be using the dispute as a point of entry back into a post-Zuma ANC, has is own snout deep in the trough, his populist demagoguery notwithstanding.
His swinishness was detailed a couple of years ago by Fiona Forde, an Irish journalist, in An Inconvenient Youth: Julius Malema and the ‘New’ ANC.  I have no idea what his present circumstances are, but when she wrote he had more than eight known properties, including a farm and a $2million mansion in . He demolished one house valued at $700,000, to be replaced with one at an estimated cost of $2.8million, complete with a bunker.  A bunker; what a sensible precaution that is.  One simply never knows when the Russians will come.
His expensive tastes run to designer suits, several Breitling wristwatches at $17,000 each and Luis Vuitton manbags. All gifts from friends, who also offer him the use of several luxury cars, he told Forde. Not friends and comrades from the townships, one assumes; not ’s beleaguered mining community, that’s for sure.
The truth is modern is a corrupt and ill-managed kleptocracy.  The gold at the end of the rainbow has been snaffled.  There is no racism though; the black pigs and the white pigs feed from the same trough.  A great comfort, that must be, to those who find it difficult to feed at all.  As ever, all animals are equal but some animals are more equal than others. 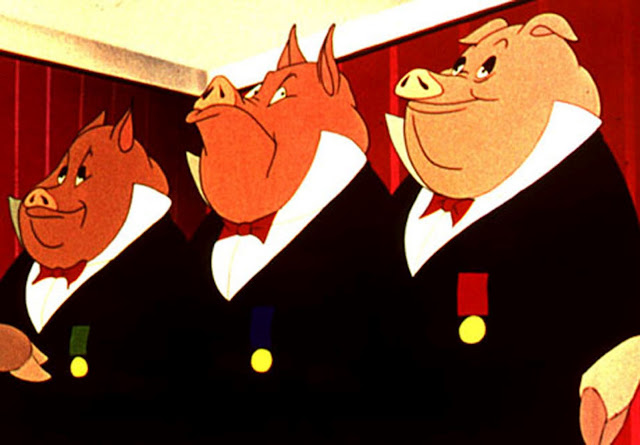