Portrait of the Thinker as a Man 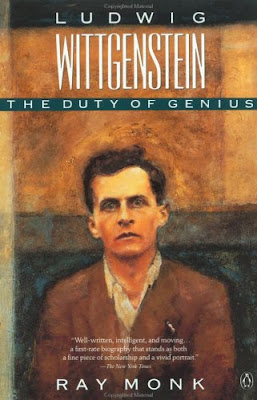 If you want to understand Ludwig Wittgenstein, the thinker and the man, turn to the very last page of Tractatus Logico-Philosophicus, the only philosophical work published in his lifetime.  There you will find in all of its gnomic beauty one of the best remembered and most quoted propositions of all: Whereof we cannot speak thereof we must be silent.
That’s just the thing: he wasn’t silent.  Most of his life after the publication of the Tractatus was a pursuit of the very things that could not be touched on in a work of uncompromising logic, whether it be the nature of language, the way language is used in practical terms, the nature of thought, of ethics, of psychology, of the relationship of philosophy to the wider world of human experience.
“If a lion could speak, we could not understand him”, he wrote in the posthumously published Philosophical Investigations.  Wittgenstein spoke.  Most who followed, particularly the Vienna School of Logical Positivists, which had as good a claim as any to be the apostles of the text, could not understand him.
Even Bertrand Russell, who wrote a preface for the Tractatus, could not understand his brilliant protégée.  The truly remarkable thing is that when the two met at  before the First World War Wittgenstein was a novice, Russell a mature and respected professor of philosophy, the author with A. N. Whitehead of Principia Mathematica, a seminal work of mathematical logic.
But Wittgenstein quickly established complete intellectual dominance, so much so that by 1912 Russell told his sister that he expected the next big step in philosophy to be taken by her brother.  It’s salutary to remember that he was still only a twenty-three-year old undergraduate!
Ray Monk understands the man, the thought and the life in thought, enough to write Ludwig Wittgenstein: The Duty of Genius.  I came to this lately, in the paperback edition, determined to get to grips with one of the great thinkers of the last century.
He is one of the people I have long admired for his clarity of expression, for those parts of his work that are accessible to me, those parts that are not too deep in an ethereal and mathematical mode of expression.  Admired, yes, but from afar, like some intimidating demigod.  Monk has brought me far closer to the man in what is a surprisingly readable and at points gripping biography.
Surprising?  It’s just that I did not expect so difficult a thinker to be reducible to such ordinary human terms.  This is the key, in fact, to this book: in its own brilliant and lucid way it humanises the idol, if that makes sense, painting a detailed and comprehensive portrait.  Monk has a commendable grasp of the material to hand, quoting liberally from letters, diaries, notebooks and interviews, coming close to understanding the thinker as a whole.  There is Wittgenstein, uncompromising in his self-critical brilliance, relentless in the pursuit of ideas and of people, full of self-assurance at some points, and at others full of the most crushing and debilitating forms of self-doubt.
As usual, given that this is the paperback edition, the cover is replete with laudatory praise.  I have no argument here; it’s richly deserved.  It is, as the Observer says, a book that is much to be recommended.  The Guardian adds that Monk’s biography is deeply intelligent and generous to the ordinary reader, statements with which I fully concur.  But the reviewer goes that one step further, saying that it’s a beautiful portrait of a beautiful life.  Hmm…a beautiful portrait?  Well, yes. I suppose, though I think the expression just a tad hyperbolic.  But was it a ‘beautiful life’?  I’m not sure.  It was an important one, yes, but that’s quite different.
Ecce homo; behold in whole.  The fact is the more I delved into the thinker the less I began to like the man.  He was far too intense, far too opinionated, far too wearing.  This is genius, and supposedly everything is excused, all normal standards suspended.  But I still came away with a feeling that, for all his brilliance, this was a man better not to know; better for some of the less able children in the Austrian elementary schools he taught not to know; better not to know a man rather too free with his fists.
He was a huge influence on the young men who came his way, turning some away from academic philosophy and Cambridge, both of which he paradoxically despised, towards more ‘practical’ endeavours.  He embraced a kind of Tolstoyan view of life, encouraging others to work alongside ‘ordinary’ people in preference to academia.  I could not help but feel that Francis Skinner, a brilliant mathematical scholar, Wittgenstein’s disciple and sometimes lover, might have been happier if he had never met him.  In his pursuit of a bogus authenticity he went to work in screw factory at the behest of his mentor, a place where he was deeply unhappy.  Earlier on he and Skinner had planed to go to Soviet Russia in the mid-1930s to work as labourers.  Fortunately for them, at least fortunately for Skinner, the harebrained project failed to mature.
I suppose it’s another measure of Monk’s skill as a biographer that he gives us a cogent warts and all portrait.  I’m probably far too conscious of the warts, but it’s comforting to see that while Wittgenstein could be a mystic he was no saint!  He is a man whom I would both loved and hated to have known, with the latter perhaps now a little more pronounced than the former.  If I had met him I would have one question to ask: who could anyone, least of all a man with your degree of insight and sensitivity, have been taken in by Otto Weiniger’s bizarre, misogynist and self-hating monograph Sex and Character?  It’s complete trash!  I’m glad to say that Ludwig Wittgenstein: The Duty of Genius is not.  Rather, in itself, it's a biography of genius.