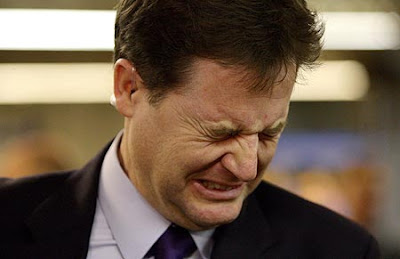 I’m a bigot; it’s official.  Nick Clegg said so, or he did not say so, or he intended to say so but would now like to pretend that he never intended to say so, or he is not really sure what he wanted to say or how to say it.  Well, that’s our benighted Deputy all over, as stupid is as stupid comes, and they do not come any more stupid.
You see, all those who have raised objections over gay marriage are ‘bigots’ or not bigots or pretend I never said bigot or whatever.  I know, I know; I’m in danger of tripping up in verbal gymnastics.  It’s that silly ass Clegg’s fault!  He has me thinking like him.  I don’t know which is up and which is down and which way is which.
I oppose gay marriage in my bigoted way not because I have an in principle or moral objection to same sex partnerships, though many do.  No, I oppose it because, as I have argued previously, it’s the worst kind of empty gesture politics, policy for the sake of policy, doing for the sake of doing, something I associate with the intellectually barren Liberal Democrats.
Anyway, here is the former Thought of Chairman Clegg, something he would now rather you never saw, sludge that leaked out of his office:
Continued trouble in the economy gives the bigots a stick to beat us with, as they demand we “postpone” the equalities agenda in order to deal with “the things people really care about”. As if pursuing greater equality and fixing the economy simply cannot happen at once.
That’s the way to do it, to dismiss much of the Church of England and the Roman Catholic Church for holding to centuries of Christian teaching about marriage.  They are bigots who simply refuse to drift with Clegg’s moral tide.  Then there are the Conservative MPs, Clegg’s Coalition ‘allies’, who oppose it as a diversion and a massive waste of Parliamentary time.  They, too, are bigots.  This is liberalism new style, an illiberal dismissal of all opposition.  Oh, incidentally, gay marriage is not exactly favoured by Muslims either.  Is Clegg guilty of hate crime?
No sooner had the pearls of Clegg dropped than his office went on an urgent damage limitation recall which, as these things do, simply amplified the offence.  A new version of the speech was issued, Stalinist style, with bigots airbrushed out.  In their place came ‘some people.’  Yes, I am some person!
Colin Hart, of the Coalition for Marriage, was one of those who leaped at the Clegg throat, accusing him of intolerance.  He accused him of more than that.  “If he believes that 70 per cent of the population who oppose his plans are bigots, he should say it, rather than trying to withdraw this disgraceful comments after press-releasing them.” sources insisted that there was no Tory involvement in the withdrawal.  “This is all their own mess”, one helpfully added.
The backtracking is getting more and more vigorous.  Apparently the ‘bigot’ text was not Clegg’s at all.  Yes, I know that politicians have others write their speeches for them, but they generally know what they want to say.  Not Clegg, apparently.  Bigot slips in and out with commendable ease.  Actually I’m quite disappointed.  I wish he had gone the all the way, accusing all those who take a different view from him of being fascists.  A bigot and a fascist, how I would have loved that!
It’s obvious that bigot really was the word of choice, not just the slip of some pathetic ghost writer.  On big matters like this there is no mistake.  It takes us right to the heart of the whole stinking modern liberal project.  Theirs is the way, the only way.  The others can be shouted down and dismissed.  Clegg and his gang have the mentality of petty bullies, whose only mode of debate is name-calling and insults.  More than that, their inconsistence, Clegg’s inconsistency, shows them to be the worst kind of flip-flopping hypocrites.
I begin to hate this government as much as I hated the previous government, and oddly enough for many of the same reasons; there is no principle, there is no substance, there is only the shallowest opportunism, the silly politics of the metro chattering classes.
Islington Man lives; he lives in the debased form of Nick Clegg, the Little Corporal of contemporary British politics.  For once I agree with the New Statesman.  Clegg has one commendable achievement in this affair – he has managed to unite the right and the left in the loathing they have for him.  I used to think that John Prescott was the stupidest deputy in Parliamentary history.  I was wrong. 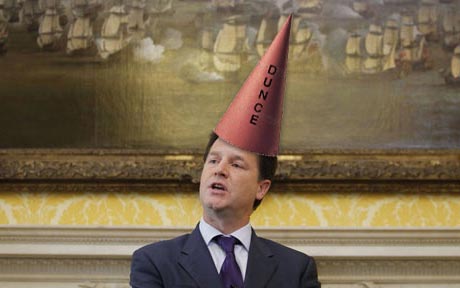