Laughing at a Clown 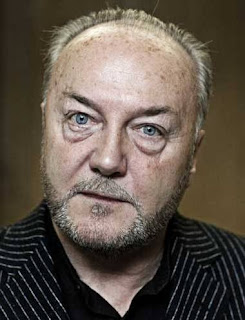 George Galloway; now there’s a name to conjure with, the Member of Parliament for Bradford West, formerly of the Labour Party and now of Respect.  In some ways he’s the modern political equivalent of the actor and director Erich von Stroheim, of whom it was said in his heyday that he was ‘the man you love to hate.’  is the politician so many love to hate, an accolade, I feel sure, which brings him a particular delight.
Douglas Murray, writing in the Spectator, talks of the sheer awfulness of this man; and, yes, he is awful, an unprincipled, ugly opportunist who latches onto any cause that will serve to advance GGG, the Greater Good of George.  A sort of socialist at one moment, and a sort of Muslim at the next, it really does not matter what the façade or the fraud is; it’s all to the good.
Do I love to hate him?  He certainly gives me the creeps, never more so when he appeared on Celebrity Big Brother.  To see him pretending to be a cat was one of the great cringe-worthy moments of modern broadcasting.  Even worse was his appearance on the same show dressed in a tight leotard, his balls, not to be coy on the point, on clear display.  Oh, yuck, yuck, yuck.  It put me off sex for a week! 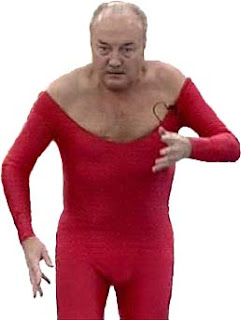 Yes, he is one of the creepiest people on the scene, but I don’t hate him; he really attracts no positive emotion at all, other than a general background noise of low level disgust,  humming away.  He is occasionally referred to as ‘Gorgeous George’ for reasons that wholly escape me.  There must be something here, though what exactly I simply don’t know.
Surely there must be something, something beyond the piggy eyes and the cruel mouth, because he persuaded enough of the benighted voters of Bradford West to send him back to Parliament, a measure less of his political skill, I suspect, than the intelligence of the voters of Bradford West.  Are they all window lickers, I have to ask?  Please be patient; an explanation will follow, not one that will be needed by Gorgeous George
Licking, yes; he rather likes licking.  In his cat guise he pretended to lick milk from the hands of a woman.  Politically he has established a reputation for licking the arse of this dictator or that tyrant, once notoriously saluting the indefatigability of Saddam Hussein, something he’s rather tried to weasel out of in his inimitable weasel-like way. 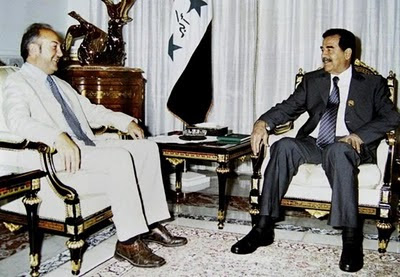 He’s gone on to praise such enlightened figures as ’s Mahmoud Ahmadinejad, Mr I’m in a Dinner Jacket, as I like to call him, and ’s Bashing Bashar al-Assad.  Ah, follow the money, always follow the money, Gorgeous George having followed it all the way to , where he is reputedly receiving £80,000 a year for intermittent appearances on a television show with links to and .  Not bad work if you can get it and he has got it.  There he is, saying that he doesn’t like jihad in but he would be all for it in Jeddah.  Perhaps the Saudis might consider a better offer?
Back home his latest come-hate-me spat concerns the use of the expression window licker, or windae licker, to use his own Scoticism, to describe disabled people.  It’s not an expression I’m familiar with but I understand its use is considered a cardinal sin.  I’ve since read that the term was voted the third most offensive that could be used relating to disability in a poll run for the BBC's Ouch! disability talk show in 2003.
So, now you know.  I have no idea what one and two are but they might also have some thing to do with licking, hands, perhaps, and backsides.  So far as I can see the only triple licker is George himself, a talent that he has perfected to a fine degree.  His windae expression caused a lot of windy comment about hate crime blah de blah, something that doubtless pleases him, all the more power to his politician you love to hate image.
People are far too serious.  George is a much misunderstood man.  Please see him for what he truly is, the court jester of modern politics, dancing for your delectation and delight.  The mature reaction should be laughter, not hate, the appropriate response when faced with a clown. 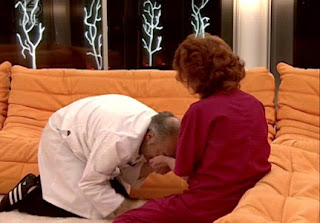