Tale of a Sphinx 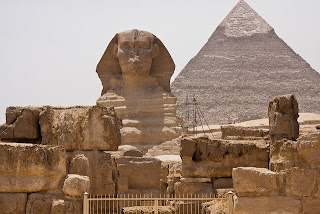 I’m sure that you will agree that we all visit certain places in our imagination, places we may never see in reality, whether it be Memphis or the Moon. There is something more, though: the power of imagination is often greater than mundane realities; but sometimes the power is just too petty.

I’ve been lucky; I’ve seen some wonderful places in my life, places that mostly met with the impression formed in the eye of my mind. Egypt was different; Egypt exceeded all. My imagination is too little. The traces left by the past are too great. Shelly was wrong. The mementos of Ozymandias are everywhere. I looked on his works and was filled with awe.

I’m in danger of exhausting my stock of superlatives, so I’m going to let someone else speak for me. She is Amelia Edwards, an English artist and writer who visited Egypt in the nineteenth century. It was standing in the great hypostyle hall in the temple of Karnak in Luxor that some words by her put everything into proper perspective, some words I read to my companions;

It is a place that has been much written about and often painted; but of which no writing and no art can convey more than a dwarfed and pallid impression…The scale is too vast; the effect too tremendous; the sense of one’s own dumbness, and littleness and incapacity, too complete and crushing. 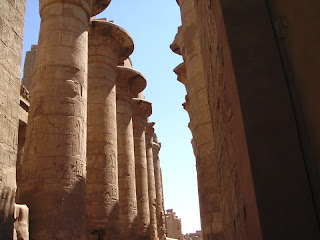 Egypt is such a contrast, a magnificent past and a not so magnificent present. Still, I met some wonderful people, including a highly knowledgeable local Egyptologist, full of hope for the future, hope that the promise of the February Revolution will be met. My natural disposition is one of caution to the point of cool reserve, but I could not fail to be impressed by their enthusiasm. I have things I have to say, though, things about the possible future of the country. I think it best if I to hold off on this for a day or so, a subject, possibly, for a Broowaha article.

My journey began as most journeys to Egypt begin, in the mad metropolis of Cairo! Incidentally – and thanks for all the emails and texts of concern – I missed the recent trouble in Tahrir Square, flying to Aswan a few days beforehand. I really only spent enough time in the city to visit the Museum, the Mosque of Mohammed Ali and the Pyramids to the south. More would have been excessive; more would have damaged my lungs and my temperament; for Cairo is the most congested city I’ve ever visited; the traffic is simply impossible.

Aswan, in Egyptian Nubia, is such a contrast, more relaxed, less demanding. Here one can really appreciate the beauty of the Nile, blue and utterly captivating. This was our base for a few days, on an island hotel. From here we set out across the Sahara to the great temple or Ramesses II at Abu Simbel. It was on a convoy, I might add, all complete with a police escort!

I’m looking out from the window of the bus at the passing Sahara, mile upon mile of sand and strange looking rocky outcrops, livened up by a growing number of watery mirages. I saw the beginnings of this great desert the day we visited the pyramids at Giza. It wasn’t at all what I expected, a sad disappointment of dirty, grey-looking sand, with shards of stone scattered around. But this is the wilderness as I imagined it, yellow and pure, vanishing into an impossible horizon. Day does not gradually evolve into night here; the division is sharp, first one condition and then the other.

Here, at Abu Simbel, I’m almost as far south as I can go in Egypt; not much further lies the Sudan. Here the ancient pharaoh still stares out in majesty, carved from the bare rock thirteen centuries before the birth of Christ. The temple is supposedly dedicated to the gods Amun, Ra-Horakhty and Ptah but the more obvious dedication is to Ramesses himself, a silent guardian over Upper Egypt, a statement about naked power, a warning to the Nubian raiders who dared venture north. This is Ozymandius, king of kings. 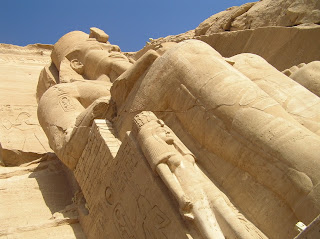 Others have been here before me, some of whom have left their own mark, elaborate and painstaking graffiti that go right back to the early nineteenth century, modern cartouches that must have taken days to carve. It’s possible to see this elsewhere, on other monuments, this pathetic and pointless plea for immortality, a tradition that seems to have been started by the soldiers of Bonaparte at the end of the eighteenth century. Gustave Flaubert, on his own sojourn some fifty years after, remarked on the sad emptiness of it all;

In the temples we read the travellers’ names; they strike us as petty and futile. We never write ours; there are some that must have taken three days to carve, so deeply are they cut in the stone. There are some that you keep meeting everywhere – sublime persistence of stupidity.

Now back in Aswan, I had dinner in the Old Cataract Hotel. Yes, I was hungry but there was another reason for eating here. You see, I’m a complete literary groupie; I followed Hemingway to Havana, Somerset Maugham to Singapore and now Agatha Christie to Aswan! She stayed in the Cataract Hotel and it features in Death on the Nile, the crime thriller I started to read before leaving Cairo. 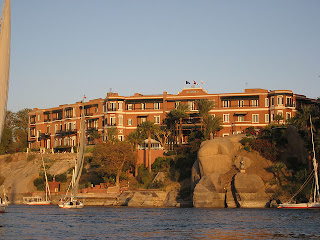 The place itself is wonderful, the staff attentive, the food marvellous. There was only one thing: it was draped in a tomb-like silence. We were the only guests. It was the same everywhere: people seemed to have been frightened away. The numbers are absent, good for us, bad for Egyptians trying to make a living from tourism. “There is no business”, we kept being told.

So, yes, I started Death on the Nile in Cairo but I finished it in true style sailing on the Nile! We journeyed north from Aswan to Luxor, two nights on the river. At Kom Ombo, where the ship moored briefly before sailing on into the night, there was time to visit the wonderful double temple, dedicated to Sobek, the crocodile-headed god, and Horus, the falcon-headed god of the sky, the avatar and progenitor of all of the pharaohs. We have passed through centuries since leaving Abu Simbel; for Kom Ombo was built in the time of the Ptolemys, the Greek interlopers who were to be the last dynasts of pharonic Egypt. 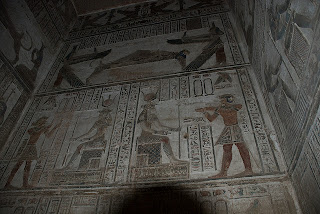 I’m running out of wind, not short of impressions, of further wonders to tell, but in danger of exhausting your patience. It’s all so much to take in, Karnak, Philae, Luxor and Dendera, temples, monuments, museums and tombs, treasures of all kinds. The Valley of the Kings and Queens defy words, with figures of gods, goddesses and earthly rulers as vivid in colour as they were when first painted some three thousand years ago. If you ever go do be sure not to miss the tomb of Ramesses VI. The great tomb of Nefertari, the favourite wife of Ramesses II, a wonder among wonders, unfortunately can only be visited by special permission and at eye-watering expense. 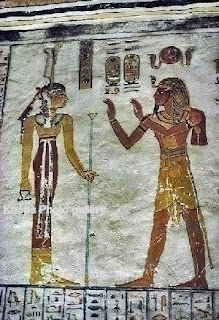 My final days in the country were spent relaxing, swimming, reading and dreaming in a hotel in Luxor, just trying to absorb the whole experience. Oh, and not forgetting a wonderful evening in a café, the only woman in the place, smoking a sheesa with some friends. :-)

Uprose the merry Sphinx,
And crouched no more in stone;
She melted into purple cloud,
She silvered in the moon;
She spired into a yellow flame;
She flowered in blossoms red;
She flowed into a foaming wave:
She stood Monadnoc's head.

Thorough a thousand voices
Spoke the universal dame;
"Who telleth one of my meanings
Is master of all I am." 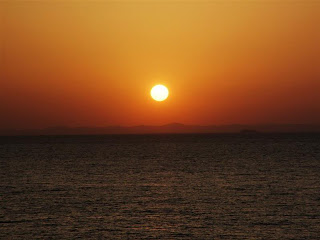