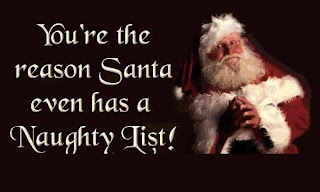 A few years ago an attempt was made in Australia to stop Santa Claus giving his jolly Ho, Ho, Ho greeting to children, substituting Ha, Ha, Ha in its place, anodyne and wholly (!) without any kind of character or provenance. Why? Because ho is slang in America for, well, a ho!

That’s just the sort of thing that would be bound to upset every Australian girl and boy, just as it annoyed every Australian parent, many of whom were discovering for the first time what a ho was and what the jolly old, red-nosed (possible alcohol problem?) fellow was calling for.

Generally speaking Santa is a disreputable old man, don’t you agree? All parents should be warned against this December interloper. After all, with school teachers being subject to levels of background scrutiny that was formerly reserved for candidates for senior office, with schools being turned into mini-prisons, we still give this unvetted stranger completely free range, to come, go and do as he will.

Every alarm bell should be ringing over the actions of this ho-monger. Every year he commits an act of mass breaking and entering unparalleled in the history of crime. More worrying still, he urges children to be ‘good for Santa’, to be good boys and girls, seduced by promises of gifts. What’s his motive here?

Here we have a stranger, coming silently in the night, creeping into the bedrooms of children with material inducements; just how much more of this are we prepared to take? Why are questions not being asked? Are social service departments not concerned? Do something, before it’s too late! Oops, sorry, it is too late; centuries too late.

Alas, we live in a humourless age. I’m tempted to write a journal message to the future, in the style of Winston Smith from Orwell’s Nineteen Eighty-Four, a greeting to a hoped for time, a time free from the absurdity of Big Nanny and Political Correctness. Will such a time ever come? I have a feeling that things will get worse before they get worse still.

The attack on Christmas and the traditions associated with Christmas is as predictable and relentless as the season itself. We’ve seen it all here in England, with one local authority substituting a ghastly ‘Winterval’, and another referring to Christmas lights as ‘Luminos’, all to avoid offending those capable of taking offence.

The disease is spreading by degrees. This year a school in Stockton, California is reported to have placed an interdict on classroom displays of Santas, Christmas Trees and even Poinsettia plants for fear of upsetting people of other faiths. Bah! Humbug!

I’m sure there lots of other tiresome examples, of initiatives thought up by tedious people, the thought police of the PC brigade who would treat us all as infants. I imagine these joyless, sour and literal-minded types were just bad girls and boys in the past, those who never, ever got presents from Santa. Christmas is in the winter of their discontent. They want the world to be like Narnia, a place where it is always winter and never Christmas.

Meanwhile the old fellow is going quietly mad, locked away in the North Pole, not much given to ho ho ho-ing or even ha ha ha-ing. Maybe he should have another look at his contract, to check if there really is a sanity clause. 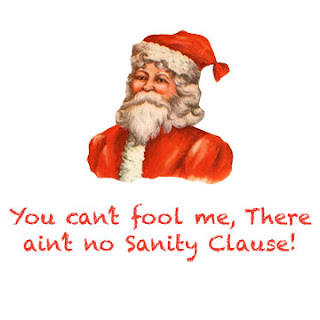