The Year of Dickens 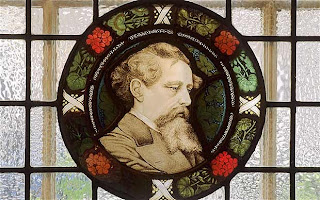 David Lodge, writing in the December issue of Prospect magazine (Our Mutual Friend), has reminded me that this coming February marks an important event in the literary calendar – the two hundredth anniversary of the birth of Charles Dickens.

A whole series of events are planned to mark the occasion, a torrent of Dickens, in publications, conferences, exhibitions, as well as new film and television adaptations of his work. A statue is also scheduled to be unveiled in Portsmouth in August, the town where he was born.

I’ve written before just how much I love his work (Adoring Dickens, May 27, 2010), so I expect to go, to see, to attend and to read as the mood takes me. The Museum of London is putting on a special exhibition about the writer’s links with the city. In so many ways he’s the chronicler of nineteenth century London, in good times and in bad. His is another human comedy. When asked why he was my favourite author I replied it was because I loved his Dante-like journeys through Victorian London, a great panorama, peopled with the most wonderful eccentrics; with the bad who are very bad and the good who are very good, archetypes one and all.

The BBC, who have produced some excellent adaptations of his novels in the past, are apparently planning several new screenings, including two of Great Expectations – a serial and a movie – and one of The Mystery of Edwin Drood. I shall be particularly interested in the latter because the mystery was never solved, the novel a permanent enigma, unfinished at the time of the author’s death. Presumably some kind of resolution will be offered.

I have a number of previous adaptations on DVD, including two TV serials of Bleak House, a 1985 version starring Denholm Elliot as John Jarndyce and the 2005 version, which I watched at the time, broadcast twice weekly in a half hour, soap opera-style, format, as opposed to the usual hour long classic series format. The latter was particularly noted for the performance of X-Files Gillian Anderson in the role of Lady Deadlock.

Dickens' place in the imagination is now unshakeable, second only to Shakespeare. Even people who have never read him will almost certainly know of some of his characters, Ebenezer Scrooge most of all, as much a part of Christmas as Santa Claus. Indeed in A Christmas Carol Dickens might have been said to have invented the modern form of the seasonal holiday. In past time, before the seventeenth century Civil Wars, it was in part a religious holiday and in part an excuse for a drunken ruckus, represented by the slightly disreputable figure of Father Christmas (not at all like Santa!) and the Lord of Misrule. A Christmas Carol recreated it in the image of Victorian bourgeois respectability and homeliness, a time of feasting, family togetherness and fun, all of the most wholesome kind! God bless us, every one.

After his death in 1870 Dickens work went gradually out of fashion, at least among the high priests of literary taste. The process accelerated, as Lodge argues in his essay, after the First World War, a time of a revaluation of all Victorian values by a generation that left cosy sentimentality in the mud of Flanders. In Evelyn Waugh’s 1934 novel A Handful of Dust the protagonist is held captive by the mad and illiterate Mr Todd, who forces him to read the work of Dickens aloud until the day he dies. This particular fate was among the worst that Waugh could imagine, as his father, a past president of the Dickens Society, insisted on reading aloud to him and his brother.

In a brave new literary world, given to introspection, psychology and floating along on a stream of consciousness, there was no room for someone as playfully unconcerned with deeper motives and states of mind as the great Victorian bard. F. R Leavis in The Great Tradition, a seminal work of literary criticism, excludes Dickens altogether from the pantheon of English literature, on the snooty grounds that “…his genius was that of a great entertainer, and he had for the most part no profounder responsibility as a creative artist than this description suggests.”

But Dickens has endured. He has found a new and ever growing audience. Why? Simply because he is beyond all fashion; because he is so human, a true craftsman in words, a great shaper of the human spirit, a writer of boundless humanity and simple generosity. I’ve read most of his novels more than once, David Copperfield three times in all, finding fresh delights each time, hating Mr Murdstone just as much as I did on first acquaintance! Doubtless I shall read it and the others again. I may even, in future times, read them aloud to my own children. :-)
Posted by Anastasia F-B at 15:57