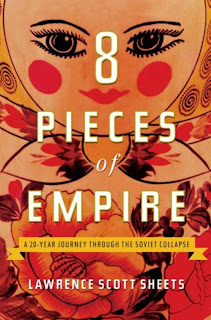 In its beginning was its end. Actually that’s not quite true; the Soviet Union came in with a bang and out with a whimper. Even so the two events were united, a long, slow motion curtain-call for the old Russian imperium. Aleksandr Kugel, a Russian theatre critic and editor, writing a few months after the Bolshevik coup in 1917 put the matter rather well;

The dying process has begun. Everything we see now is just part of the agony. Bolshevism is the death of Russia. And a body the size of Russia cannot die in one hour. It groans.

It certainly did groan, decade after decade, a body in terminal decline, a body destroyed by the most aggressive form of ideological cancer. Mikhail Gorbachev, the last president of the USSR, made one fundamental error: he formed the belief that he was a doctor; in fact he was an undertaker; he tried to raise Caesar only to bury him. His twin medicines, glasnost and perestroika, openness and restructuring, only served to reveal just how bad the patient was, how terminal the condition. The benighted man finally opened to the truth, delivering a funeral oration on Christmas Day, 1991. It all ended with mealy-mouthed good wishes.

There are odd historical ironies here. Imperialism, according to Lenin, is the highest stage of capitalism. His communist state was the highest stage of imperialism. In other words, the revolution of 1917 preserved in aspic what was in effect a Tsarist colonial structure built up over centuries. The Russian Slavs had taken up the white man’s burden, ruling over Kalmyks, Uzbeks, Chechens, Inuits, Tatars and patchwork of other nationalities, races and ethnic groups. As it was, the nationalities suffered the harshest colonial oppression at the hands of Stalin the Georgian, whose first post in the Soviet government was - another irony - Commissar for the Nationalities.

The house that Lenin built collapsed that Christmas Day in what is surely an event unparalleled in the history of anti-climaxes, but the aftershocks were quite devastating, the fall-out from this post-imperial scramble. Lawrence Scott Sheets, an American reporter working for Reuters and National Public Radio, witnessed the whole thing, his experiences now written up in 8 Pieces of Empire: A 20-Year Journey Through the Soviet Collapse, which serves as a personal record; part memoir, part travelogue, part political analysis.

There are surely few regrets over the death of the Soviet Union; there must be lots over what followed - the crazy ethnic conflicts, the revival of quarrels sublimated for generations; the murders, the kidnapping, the anarchy, the criminality, the chaos and the terrorism. Then there was the flight into fresh forms of dictatorship in some of the new states, based on personality cults that might have embarrassed Stalin.

This terrible scattering left peoples and countries trying to establish a place for themselves, a sense of identity, a sense of belonging. With borders defined in the past by bureaucrats, taking little account of history or ethnic composition, the outcome was sadly inevitable – a series of racial and territorial wars that are thought to have cost the lives of up to 200,000 people.

It’s the pathology of upheaval, to use his own phrase, that Sheets writes about, in an intimate, honest and wholly revealing way. It was at its worse in the Caucuses, particularly in Georgia, whose post-Soviet history might very well serve as a case study in political lunacy. This was a place that went, as the author puts it, from being the crown jewel of empire to a failed state by steady stages. There was Eduard Shevardnadze, once a respected Soviet politician, fleeing from his homeland, the newly-independent country’s first president, in a ravaged, jet-fuel-dripping plane covered in bullet holes, the principle victim of the so-called Rose Revolution

Conflict, fissure and war were to follow, in a country so extreme in forms of behaviour that notices had to be posted in parliament reminding the legislators to leave their guns outside. What astonishes me most is that Georgia was once a serious candidate for NATO membership, with all its smouldering resentment against Russia, coming to a head in 2008. How horrible, fantastic, incredible it is that we might have been involved in a quarrel in a far away country between people of whom we know nothing, as someone or other once said. :-)

The book concludes with the greatest horror of all – the Beslan Massacre of 2004, when a school in North Ossetia, the scene of a hostage crisis, saw the deaths of almost four hundred people, many of them children, caught in a vicious cross-fire between Chechen terrorists and heavy-handed government forces. Sheets is at his most poignant here, recalling how he gave a shocked teenager his phone so he could contact his sister. She was already dead.

“Feeling at best an interloper and at worst a tragedy speculator,” he writes, “I put my equipment away. Covering war and tragedy is a bit like exposing oneself to radiation. In carefully measured doses, it often poses few well-established health risks…Unlimited exposure over very long periods, however, is unwise for the mind and the soul.”

He stopped, I feel sure, just at the right time, for the process of fragmentation, as he warns, is by no means at an end. A return to these horrors was unthinkable, save for the fact that in Russia nothing is unthinkable, as Isaiah Berlin once wrote.

There is no analytical depth to Sheet’s book, no meta-narrative, but it cuts in a personal and revealing way, without fuss and burdensome detail, into several tragedies in several acts, staged all the way from Saint Petersburg in the west to Sakhalin Island in the east, all in eight uneasy pieces and more. It’s a story told with moving sincerity, one that goes far in helping to understand how a country evolved from a bureaucratic morass into an ethnic mess. I will never think of journalists reporting from the front line in the same way again.
Posted by Anastasia F-B at 15:59