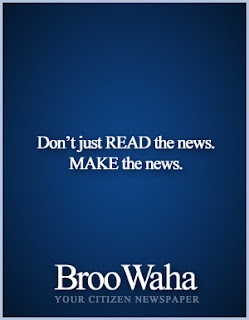 I’ve been writing for BrooWaha, the American-based online citizens’ newspaper, since the end of May, so far contributing over seventy articles on a wide range of subjects, all of the things that reflect my varied interests, from politics to popular culture.

It’s a fine endeavour, an excellent platform for writers of all sorts, superbly run and managed by Tony Berkman and Angie Alainz, one I’m absolutely thrilled to be associated with. Besides writing for the general pool I also contribute a regular Tuesday column, Letters from Ana, chiefly touching on aspects of life in England, though occasionally ranging more widely.

Yes, as I say, I’m delighted to be associated with Broo, invited to participate by Cher Duncombe, the former editor, who was particularly helpful and encouraging. But, alas, there has been a little blood on the carpet of late, after a silly and self-regarding clique decided that they did not like the general direction the paper was taking. They left, now declaring their splendid isolation in a risible and pompous mood, full of inflated self-importance. Personally I feel that Broo is all the better for this cleansing of the Augean Stables.

I honestly could not care less about this childish gang, but what I do care about is the truth. I care when comments are made about me, inaccurate and lying comments by a – Scotch – bear of very little brain and even less understanding, a sort of pathetic journalist manqué. Oh would that my enemy wrote a blog! No mention is made of me by name, of course, (it’s all oblique references to a ‘right-wing writer’) and I’m not going to bother adding a link. I simply intend to return the compliment in a cryptic and crystal mood, just a way of shattering an ego made of glass!

I write in direct and uncompromising style; I write as honestly as I can, with as much integrity as I can, not seeking favour, not attempting to mollify in any fashion. If you can’t stand the heat get out of my kitchen. My articles are almost always opinion pieces based on a substratum of fact, pieces in which I advance my own political perspective, firmly set to the libertarian right.

Inevitably I attract enemies, the small-minded and the intolerant, people who cannot bear to see an alterative view, people who come at me like a blunt-witted hurricane (hurricane, yes, that’s the word!), stalkers of all sorts. It’s always the same wherever I go, wherever my footsteps take me, from My Telegraph to BrooWaha.

People are at liberty to challenge my opinions, something I welcome. What I can’t tolerate is gratuitous and distasteful abuse. If it comes in comments attached to my public articles, so be it; I have a personal policy of ignoring trolls and leave it to the site editors to determine if particular remarks should remain or not.

It’s quite a different matter when it comes to unsolicited personal messages, containing implied threats of all sorts. It happened on BrooWaha. The individual in question, also to remain nameless, was advised to back off, initially, as I understand it, by Ms Duncombe, the former editor, who asked me to let her know if there was any repetition of the problem. Some time after this he complained that he was not allowed to comment on my articles. He was then told by Tony Berkman that it was a matter of indifference to me whether he commented or not, as I would continue to ignore him.

That, as they say, is that. Actually, it wasn't; for further unsolicited messages were sent not long before I left for Egypt, with content that suggested unsettling forms of obsession, content that suggested, at least to me, that this person had serious mental health problems. Supposedly of the political left, he shows unbelievable levels of intolerance bordering on carpet-chewing hysteria. No surprise there, I suppose.

Duncombe having since departed, I reported the matter to Berkman in his capacity as editor-in-chief, for the first time ever revealing the full contents of a private message, partially because the abuse was directed at him as well as me, gibbering, incoherent stuff. The said person was immediately banned, a pity in a way, a pity when any community is diminished, though quite understandable in the light of his bizarre behaviour.

My attention was drawn to the blog I alluded to above, a sort of rambling hate piece, directed chiefly against Berkman. The Scotchman in question, another intolerant lefty (left-wing and tolerance are obvious contradictions), prides himself on ‘facts’, though his own ‘facts’ come in a highly selective form.

First, I was not brought to BrooWaha by Berkman but by Duncombe, following a published interview with me by the former on Blog Catalogue. Second, and more important, the alleged favouritism shown towards me by Berkman is a complete fiction. I have a good working relationship with him but he has never demonstrated any open bias beyond expressing a general agreement with some of the things I’ve written about. The protection he offers to me is such that is offered to all without favour.

The other thing I’m accused of is making derogatory comments about the banned contributor, including supposed suggestions that he was an anti-Semite. Rather odd, considering that I gave up reading his tiresome articles at an early stage and stopped addressing him directly on any subject. He was banned not for “exercising his right to free speech”, something I personally hold sacred, no matter how much I despise particular views, but because of the aforementioned personal abuse.

Maybe the sycophants who congratulated the Scotchman on his plodding skills will read this too, just for the sake of a spot of balance. It’s rather a pity that I no longer have the private messages in question because they reveal so much, meat for all sorts profiling insights. Still, good manners and a hatred of vulgarity in any form would doubtless have prevented me from publishing.

Oh what fun this is, what fools these mortals be!
Posted by Anastasia F-B at 15:46