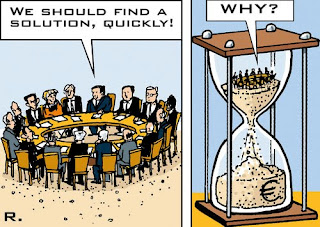 What follows is an article wrote for BrooWaha. The subject matter is in part covered by my previous article on the great European fiasco (The Majority is Always Wrong), though I tailored this piece specifically for a North American audience. BrooWaha is in lockdown at the moment (there have been no fresh articles in two days), so rather than see it lost in a logjam I’m publishing it here.

Are you following events in Europe, the slow motion death of democracy? Yes, that’s what’s happening, all part of the continuing attempt to stabilise the troubled euro, all part of an attempt to restore the confidence of the financial markets in the benighted single currency.

The latest proposal, one that Britain opted out of, is to introduce more centralised control over the tax and spending decisions of the individual members of the euro-zone, some seventeen in all at present. European leaders, in their boundless wisdom, have suddenly discovered that one cannot have monetary union without fiscal union; or rather one can, if one wants to see the madness that has beset the whole vanity project over the past few months. And fiscal union has to involve some mechanism for overruling national governments.

No taxation without representation, was the battle cry of the American Revolution. It really does not matter who represents you in future; in practical terms they will be irrelevant, is the manifesto of Europe’s more perfect union. Just imagine if King George had agreed to all of the rebel demands in 1776. Yes, that’s fine; choose your government, elect your president, raise your taxes, but just make sure that the details of your national budget are sent to London so that we (the royal we, of course) can say yea or nay. There will be penalties if you don’t.

There is a terrible irony at work here, as I noted on my personal blog, an irony that sees countries like Greece and Poland, countries that struggled for centuries for national freedom, giving away the last traces of sovereignty to a new central power, a new Ottoman Empire or a new Soviet Union. Under the proposed arrangements it will not matter who or what the people vote for; the real decisions will be made not in Athens or Warsaw but in Brussels, not by elected politicians but by bureaucrats, a bloated and corrupt officialdom.

It would be wrong to assume that this sinister process has come about purely by accident, a by-product of the present financial crisis. Writing about the euro last month, Nigel Lawson, once the chief financial minister in Margaret Thatcher’s government, mentioned a particular faction of Europhiles, people who had a different agenda all along;

They fully understood the dangers yet promoted EMU [European Monetary Union] precisely because a crisis could be overcome only by full fiscal and political union. For them, this was the objective. But such union is only practicable if it is the clearly expressed wish of the majority of the people of Europe; and that is manifestly not the case. Contempt for democracy has always been one of the least attractive characteristics of the European movement. It lies at the heart of the present crisis.

There is indeed contempt for democracy in this; that is not too strong a way of expressing the point. There is also a deep condescension among those charged with the responsibility of directing the whole European project from offices in Brussels, a belief that the process is too technical, too complicated for ordinary voters to understand. In the past when new treaty arrangements were rejected in national referenda they were simply repackaged in a different form and accepted without the inconvenience of the vox populi.

I’ve written before that Europe is now in a post-democratic age. The evolution towards a centralised, technocratic future just got faster. There is no repression, there will be no repression, other than repressive tolerance, allowing people to say all that they want, confident what they want will always be ignored. This is a recipe for political disaster, for a deeper political crisis that cannot be long delayed, a perfect storm. Remember, you read it here first.
Posted by Anastasia F-B at 16:00