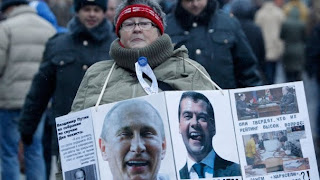 In my previous article I said that Russian democracy was a hollow façade, based not on respect for the people but on condescension and contempt. But the Duma elections earlier this month brought a major shift, a bloody nose for the Putin’s United Russia, “a party of crooks and thieves”, a title given to it by Alexi Navalny, a Russian blogger.

The crooks and thieves won but on a greatly reduced majority, with their share of the vote falling to under fifty per cent. This is all the more remarkable because the whole election was rigged, blatantly so. The principle followed here is based on one of Stalin’s maxims, that it is counting rather than voting that matters. But even positive counting and ballot rigging could not stand against an adverse tide; the ballot boxes could not be stuffed fast enough. According to independent monitors, the real figure for United Russia might be as much as fifteen or twenty points lower.

Putin has long been a puzzle to me. He’s a colourless apparatchik, a bureaucrat of little imagination and less charisma, Soviet man at his dullest. But at least he brought stability after the chaos of the Yeltsin years; and for Russians ‘managed democracy’ was far more tolerable than drunken anarchy. Managed democracy and stability is one thing; cronyism, corruption and stagnation quite another.

In my previous piece I said that Russia’s democratic institutions were a joke, that elections were no more real than they were in Soviet days. I now have to amend this view. Russia has spoken with a different voice. Politically speaking the country may be a little like the dull-witted giant of fairy tales, but even giants can be prodded too far.

Putin may long for the Brezhnev years (the former leader is promoted as a positive figure by his government) but things have changed. The present is a foreign country; we do things differently here. We do things differently in the age of instant communication, the age of the internet, the age of Twitter and Facebook. In Russia’s former days heterodox opinions circulated around a small number of people in printed samizdat. Now communication takes the form of an electronic hydra; cut off one dissenting view and dozens more appear. People had enough of United Russia.

The election was never going to bring real democracy; it’s open to question if the Russians even want such a thing, tainted as it is with past miseries, but it acted as a popular referendum on the party of Putin and the way things are being managed in Russia.

Putin has been highly effective in the past, promoting himself as a patriot and re-establishing national self-respect after the nadir of Yeltsin, but he has allowed the weed of corruption to grow to the point were it is a serious danger to Russia’s economic well-being and his own political future.

Russia is a gas giant. It depends on its natural resources. Its prosperity is tied into the price of energy. But so much of the national wealth is being siphoned off in shady deals that the budget will not balance if the price of oil does not remain high, which is unlikely given the world’s present economic woes. With foreign investors already being frightened away by graft, intimidation and a weak system of contract law, guarantees which guarantee nothing, the Potemkin mirage is already beginning to break up.

We’ve been here before, this predictable cycle of Russian history, where unresponsive and sclerotic governments buckle under tectonic pressures, Tsarist days and Soviet days, it’s all much the same. Putin is not yet ready to go the same ways as Nicholas II or Mikhail Gorbachev, but he has received a warning. If I can put the point another way, the Duma elections is his 1905, not his 1917 or his 1991.

He is likely to survive, at least for the present; he his likely to dump United Russia, too horribly tainted as a political vehicle, he is more than likely, given the system, to win the coming presidential election. But the system he stands atop of, the bureaucratic hydra based on a monopoly of power and wealth, a parasitic state, looks vulnerable.

December 2011 may be dress rehearsal for something bigger. “Russia without Putin”, demonstrators shouted on the streets of Moscow after the results were announced, before they were dispersed by the army. It may yet be.
Posted by Anastasia F-B at 16:12