A Perfect Read for a Perfect Moment 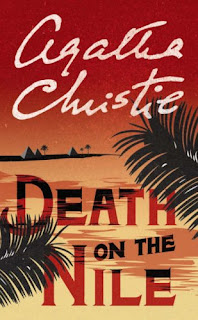 I suppose it’s not a terribly good idea to read a crime thriller when one already knows the outcome. Half the fun, after all, is in the surprise, or in discovering that one is as sensitive to the clues as the sleuth! I came to Death on the Nile for the first time in no need of clues because I already knew whodunit from watching an old movie with Peter Ustinov in the role of Hercule Poirot, Agatha Christie’s ace French, sorry, Belgian detective.

I’m not a huge fan of traditional crime fiction. The only other novel by Christie that I’ve read is The Murder at the Vicarage, which was a little too twee for my taste. It’s odd, though, because I’ve hugely enjoyed the film and television adaptations of her work, engaging and escapist.

So, I knew that the book would be no mystery; I read it because I, too, was in Egypt, in the Cataract Hotel and sailing down the Nile. I read it, in other words, for the location and for the romance, if that’s the right word for a novel centring on a murder! The whole experience, the country and the novel, the country in the novel, the novel in the country, was hugely enjoyable.

This is not literature; it’s simple, uncomplicated stuff. The style is limpid if a little old-fashioned at points (the younger women are horribly patronised!) The characters are reasonably well-drawn, much better, I thought, than the shallow figures that populated The Murder at the Vicarage, and the plot very well constructed. I suppose that’s the thing about crime fiction, it’s much more about plot than people. I really can’t imagine Christie’s people having much in the way of an interior life, even Poirot for all his talk of ‘little grey cells.’

Death on the Nile carried me very nicely along the Nile. It was interesting to note the variations between the film and the novel. For instance, the scene in which a large stone almost kills Linnet Ridgeway, the chosen victim, comes at the temple of Abu Simbel and not at Karnak. It’s also interesting that the party were able to visit the temple straight from their cruise ship, no longer possible since the construction of the Aswan High Dam.

Incidentally for those who have seen the movie and not yet read the book the latter is far more plausible. The movie is enjoyable enough, with some wonderful costume designs, but there are simply far too many suspects, just about every other passenger on the cruise ship apart from Poirot and Colonel Race, his friend. It’s less necessary to suspend disbelief, especially over the rather risible scene when everyone gathers together in one room while the detective eliminates them one by one prior to identifying the real culprit. Poor Poirot; he never, ever gets a break. Why on earth do people always insist on committing crimes in his presence, especially when they have previously identified him as the ‘famous detective’?!

I shouldn’t give too much away in spoilers, especially if you, dear reader, have neither come to the book nor seen the movie. Let me just say that the crime is truly monstrous, a young woman, rich and beautiful, a woman with everything to live for, is butchered not for love but for money, not for high passion but for low greed, killed by a man (he does not act alone in the conspiracy to murder) for whom love is not enough. The criminal, a shallow dilettante, is a kind of version of Sir Percival Glyde from Wilkie Collins’ The Woman in White, less monstrous and more monstrous at one and the same time, if you understand my meaning.

The other interesting thing for me is that some things in Egypt have hardly changed at all. Death on the Nile was first published in 1937. There is a scene in Aswan where Poriot is walking down the streets, perstered all the way by touts. His companion tells him that it’s best to pretend to be deaf and blind. If you ever go to Egypt I urge you to follow this advice!

This isn’t really a review, more an appreciation of a book, of a time and of a country, a personal assessment in which the experience of reading and the experience of seeing came together in perfect harmony. Death on the Nile is far from being a great book, but I give it five stars, that judgement notwithstanding, simply because it now has an abiding personal meaning for me. I’m unlikely ever to read it again because it’s been absorbed into one of life’s perfect moments…and perfect moments should never be revisited.
Posted by Anastasia F-B at 15:37