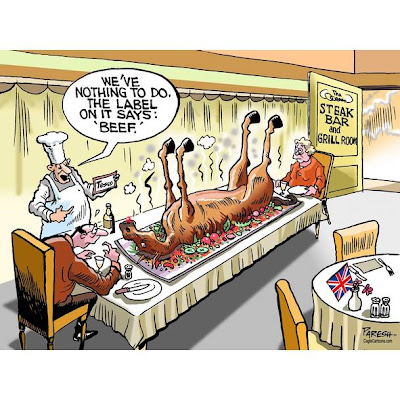 You obviously will know about the horsey in the national diet if you are British, on the assumption that you have not been away on Mars for the past few weeks.  For the rest of the world, those who are blissfully ignorant of these shores, let me just say that the British public, or the poorer part of it, was being fed horse meat pretending to be beef.
Shocking! Shocking!  Mind you, I’m not convinced that those who buy tripe (possibly?) like Findus’ or Tesco’s deep frozen lasagne really know or care what they are eating, so long as it has a meaty taste.  Then there are the burgers.  Lord alone knows what’s in those.  Actually, we do know – udders, guts, sexual parts, all rendered down; revolting enough, even when it is not horse.
There was a readers’ poll in the Daily Telegraph recently arising from the horse meat scandal. The question was simple: do you think it acceptable to eat horse meat or not?  I voted no, because I would no more eat horse than I would eat cat or rat.  Rat, yes, this is something I will come on to in a bit or a bite.  The result of the poll - revealed after one had voted - was almost neck and neck, the antis winning by a mere nose.  So, whether or not the pros actually eat horse burgers they do not think there is anything wrong in principle here.
Oh, but there is.  First of all the issue is about honesty.  I know one virtually has to have a PhD now to make sense of the labelling on food products, but at the most basic level people have a right to know if they are eating beef or dog meat.  If they have a preference for dog that’s fine, just as long as they understand what it is they are buying.  I say dog, knowing full well that the Telegraph poll would have produced a far clearer result if that had been the product in question, though there are some places in the world where dog is considered tasty and nutritious.
The real issue, the issue that is beyond the comprehension of the unimaginative, is that of adulteration; of the corruption of food, a corruption born of the drive to feed the masses with the cheapest product available.  “Let them eat cake”, Marie Antoinette is falsely alleged to have said.  But that is positively benign compared with the “Let them eat crap” of the modern food Tsars.
The adulteration of food was big issue in the nineteenth and early twentieth centuries, both in England and the United States.  The problem got worse with industrialisation, when cheap food was a necessary corollary of low wages.  In the States it got so bad that the New York Evening Post published a parody of a well-known nursery rhyme;
Mary had a little lamb,
And when she saw it sicken,
She shipped it off to Packingtown,
And now it's labeled chicken.
Upton Sinclair caught the mood in The Jungle, a novel published in 1906, which described the dreadful conditions in the meat packing industry.  But sick lamb pretending to be chicken was not enough for him; oh, no.  He went that step further, claiming that the workers who had the misfortune to fall into the rendering tanks were ground up and sold with the rest as Durham’s Pure Beef Lard! 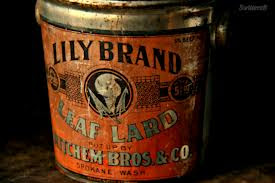 We have come a long way since then, with legislation and inspection aimed at reducing corruption (meat) and corruption (human).  No we have not.  If anything the situation is getting worse.  Corruption, in one form or another, is the name of a pretty dirty game; and when it comes to meat things can get an awful lot dirtier.  It’s not really that long since England was beset by the BSE crisis, when it was discovered that rendered meat products was being fed to cattle, with disastrous human results.  We learned from that that we clearly learned nothing.  For now horse is in the stakes and the steaks.
Keep your eye on that horse; keep your eye on the one named Profit, the odds on favourite; for that is what it’s all about.  We have enough pasture in England to produce all of the lamb and beef we need, with pork and chicken not far behind.  But we have become a link in a longer and longer international food chain.  The more extended it gets the greater the opportunity for criminal intervention.  Writing in the New Statesman (Meat Market, 22 February), Colin Tudge rightly asked “If crooks along the tortuous food chain can add horse to our meat products, why not dog, or rat, or cat?”  Yes, why not?  He raises some additional pertinent questions;
Given that the world trade in bushmeat is now vast, why not add bush fat of baboon?  What’s to keep out the meat that has been assigned for pet food?  Why not meat that has been condemned?  What guarantees can be given?
None, it would appear, though we have had a Food Standards Agency in England for the past twelve years, a guarantor that clearly guarantees nothing.  Then there are the supermarket chains like Findus and Tesco, who have singularly failed to investigate their suppliers.  Then there are the politicians, who assure us that our meat is ‘safe’ when they know full well that, as a member of the European Union, we as a country have no proper control over the product that comes from the Continent.  Horse meat today; cat or rat tomorrow.
I think there is a strong element of cynicism here.  As I say, the horse to watch is Profit.  The poor - and it is the poor - are the principle victims of our two for one deep frozen food culture.  In the wake of the horse fiasco, super market chiefs are saying that their products are likely to become more expensive, that the days of cheap food are over.  This suggests to me that they already knew that there was something fishy, make that horsey, about the stuff they were selling, that or they simply did not ask too many pertinent questions.  Get ‘beef’ from Mexico or Bulgaria rather than local suppliers – why not?  It’s cheap and goes very well in burgers and lasagne.
This is a story, as Tudge says, that might turn nastier yet.  The world food chain is out of control, or falling in to the control of unscrupulous profiteers, pirates of all sorts, the sort of people who only care about Profit, the one horse they do not want to see fall.  Inevitably the scandal will settle down as cosmetic changes are made, as politicians issue further assurances and standards are supposedly raised, as the public’s fickle attention turns to some other tale of woe.  Those who have become veggies, fearful of eating horse, will return to meat.  The pendulum will swing the other way in this best of all possible worlds.  At least until it is discovered that the benighted public have been eating something a lot less benign than horse.  In the meantime I would strongly urge you to avoid Durham’s Pure Beef Lard. 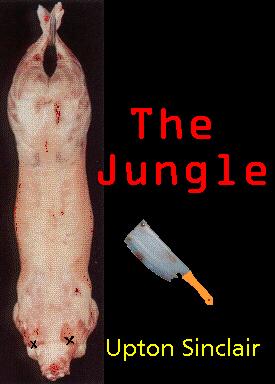