In one final attempt to break to break the bars of the prison outside prison, he dons a military uniform, that of a captain.  As if by magic he ceases to be invisible.  The clothes have made the man.  He orders some passing troops to fall in, marching them to the town hall, hoping to trace his missing papers.
On the way he stops at the police station, there ordering the officers to ‘care for law and order’ by preventing all telephone calls to the capital for the next hour.  In the town hall both the mayor and the treasurer are arrested for ‘crooked bookkeeping’.  The Captain orders the safe to be opened.  When the mayor asks for a warrant he points to the bayonets of his soldiers, saying ‘These are my authority’, a line in any other country in the world that would have exposed him as a fake.  The safe is opened and the mayor relieved of a fairly large amount of cash.  A receipt is provided, of course.  After all, this is a society built of paper.
I know this seems like a fairy story but it really happened.  You may very well have guessed where from the name of the Captain.  Yes, this is Germany, the Germany of Kaiser Bill, Prussia, to be precise, a place obsessed with uniforms and tied tight in regulations, a place where to hear is to obey, a place where everyone only obeys orders.  The little drama took place in the town of Köpenick to the east of Berlin, from which Voigt was ever after known as the Captain of Köpenick.
He was caught and faced another lengthy term in prison.  But his exploit captured the imagination of a people not generally noted for their sense of humour.  Bit by bit he was transformed in to a German version of Robin Hood, and as such he is still celebrated today.  Even the Kaiser was amused, later pardoning Voigt as an ‘amiable scoundrel.’  But Bill was not a subtle man; the irony and absurdity of the incident and all that it told of the Second Reich was lost on him.  He was pleased, rather, by the obvious reverence that a military uniform carried among the people at large.
A quarter of a century later Carl Zuckmayer, a playwright, wrote Der Hauptmann von Köpenick – The Captain of Köpenick -, a satire based on the incident.  First performed in Berlin in 1931, it was a commentary on contemporary society as much as the past, a commentary and a warning.  Two years later it was banned and Zuckmayer went into exile.  The Kaiser, unsubtle or not, had a sense of humor.  Hitler had none.
The Captain of Köpenick is a play not that well-known outside Germany.  I don’t suppose there is any great surprise in this, in that the humour does not travel that well, or German humor, to say the least, tends to be a little bit on the heavy side.  But it has made one of its rare foreign excursions to London’s National Theatre, which is where I saw it at the weekend. 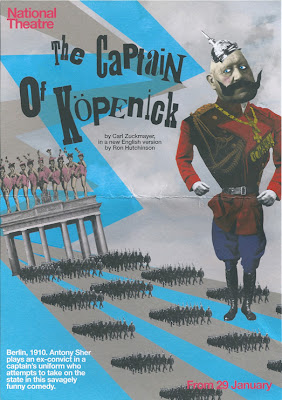 In a new English language version by Ron Hutchison and directed by Adrian Noble, it stars Anthony Sher as the eponymous anti-hero.  It was a commendable performance, just as I have come to expect from Sher, an actor of range and depth.  Here he could embrace comedy and pathos with equal ease, as he was transformed from a real nobody into a fake somebody, the talented Herr Voigt!
Set in the National’s Olivier Theatre, the play made good use of all the technical wizardry at the director’s fingertips, allowing for rapid scene changes, including some wonderful expressionist-cum-cubist Berlin cityscapes in the style of The Cabinet of Doctor Caligari.
The Captain of Köpenick is as relevant today as it was when first performed.  The continual flow of bureaucratic absurdity from Brussels is sufficient proof of that.  I could only wish that it had been handled with greater skill.  I found Hutchison’s updated version irksome and silly at points rather than funny, descending now and again into outright vulgarity.  More than that, Zuckmayer’s message is obvious enough, the satire biting enough, without the need for the continual reminders, and certainly without the need for the climatic “hysterical Dance of Death.”
This is a play, as I wrote above, that does not travel well.  It might have travelled better with a little more discipline, a little less reverence and a lot less Teutonic stodge!  Still, Sher, along with some of the supporting cast, makes the experience all worthwhile.  If you are in London, and minded to go, the Captain will be goose-stepping around until 4 April. 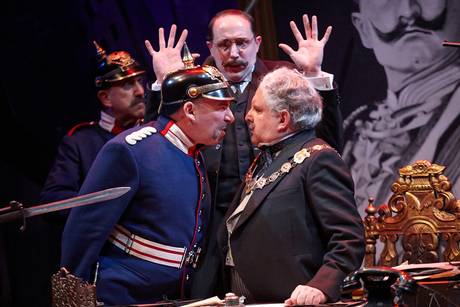