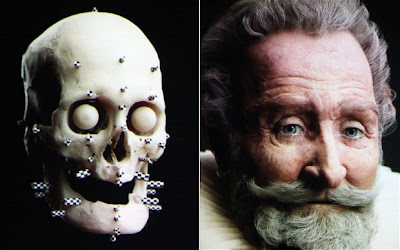 Royal reconstruction is rather the fashion at the present.  First we had England’s Richard III, discovered illegally parked in Leicester, now we have France’s Henri IV, the other king who lost his head during the Revolution!

Buried in the Basilica of Saint Denis, along with the other monarchs of France, his body was dug up by revolutionaries in 1793 and thrown into a mass grave, though some mystery admirer managed to make off with the head.  It finally turned up, after a two century gap, in the attic of a retired tax inspector, or so it is claimed.

Henri, who was assassinated in May 1610 by a deranged religious fanatic, was one of France’s better kings.  The first in the Bourbon line, he converted from Calvinism to Catholicism, thus ending the Wars of Religion that had troubled France for a good bit of the sixteenth century.  Paris was worth a mass, he famously said, just as famously promising the French people the means to have a chicken in the pot every Sunday.

The reconstruction, carried out by Philippe Froesch, a craniofacial expert linked to Barcelona University, certainly looks convincing, resembling the king’s portraits in life, though the addition of the hair,  the beard and the ruff has certainly helped!  Identification was apparently aided by a gash near the nose, as well as a beauty spot and a pierced ear along with other key features.  But, alas and alack, Good King Henri has been the cause of a new civil war between France’s squabbling royals.  Yes, they are still around. 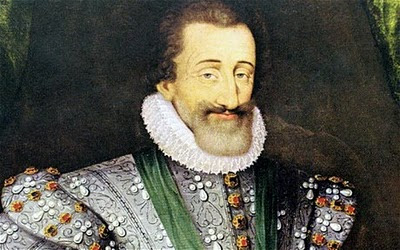 The head comes, you see, at the head of a new book – Henri IV, The Mystery of the Headless King by Stéphane Gabet and Philippe Charlier.  “Oh, yes it is”, they say.  “Oh, no it isn’t”, the critics reply.  The brain was still in place, they say, though that would have been removed after death by the royal embalmers.

The royals have weighed in, the Bourbons on the pro side and their Orleanist cousins on the anti.  Prince Louis Bourbon, a banker and Henri’s distant descendant, says that the head is genuine.  There is no question of it, he explained to journalists Le Figaro, “It is both highly moving and a great responsibility.”  Well, I suppose it would be, coming face to face with a face from the past.  In the other corner there is Henri d'Orléans, Count of Paris and Duke of France, described the book as a "pseudo inquiry". "This affair seems closer to a novel than scientific or historic truth," he told French journalists. "What are we supposed to see from this supposed facial reconstitution – that he had a Bourbon nose?"

Yes, I suppose he has the point, by a nose at least.  Support here has come from Oliver Pascal, president of the French Institute of Genetic Testing, who told Figaro that there is no conclusive proof that the head is Henri’s.  “The information would not stand up in a court of law”, he added.

Meanwhile the head that may or may not have been that of the king sits in a bank vault, ironically enough, in the Bastille district of Paris.  The mystery of the head looks set to intrude into French testimonials for some time to come, rather like that of King Charles, which continually troubled poor Mister Dick.

‘Do you recollect the date,’ said Mr. Dick, looking earnestly at me, and taking up his pen to note it down, ‘when King Charles the First had his head cut off?’   I said I believed it happened in the year sixteen hundred and forty-nine.

” ‘Well,’ returned Mr. Dick, scratching his ear with his pen, and looking dubiously at me. ‘So the books say; but I don’t see how that can be. Because, if it was so long ago, how could the people about him have made that mistake of putting some of the trouble out of his head, after it was taken off, into mine?