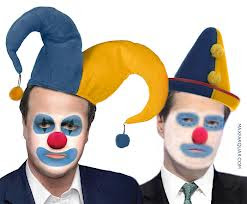 “Those whom the gods wish to destroy they first make mad”, so the ancient proverb goes.  I’m quietly rejoicing over the great Cyprus bank bungle, the latest symptom of European insanity and a clear sign that the gods are on my side!  I have my eye also on the craziness of our present coalition government in England, the craziness in particular of David Cameron and George Osborne, the Dumb and Dumber of our political life.
I’m in the mood for quotations; I’m in a particular mood for Disraeli.  England does not love coalitions, he rightly said.  I would update this slightly by saying that England hates coalitions; this Englishwoman certainly does.  The grand old Tory also said that a Conservative government is an organised hypocrisy.  My, oh my, I do wonder what he would have made of our present government and the present leadership of the Conservative Party – a disorganised idiocy, perhaps?
Lynton Crosby, Cameron’s campaign chief, has a cunning plan for a Tory victory in the scheduled 2015 general election, or so I read recently in the Telegraph.  In the wake of the drubbing the Party got in the recent Eastleigh by-election there are to be no more stupid ideas.  Really?  Then I take it we can see gay marriage and windmills dropping from the agenda?  I have a plan also for a Tory victory, though it’s not really that cunning – get rid of Cameron and Osborne.
Take the Prime Minister…please.  Mediocre leaders are the rule rather than the exception in the Tory Party.  Margaret Thatcher?  No thanks; let’s have John Major instead.  But, my goodness, on the scale of mediocrity Cameron has no contenders.  He even manages to make Stanley Baldwin look good.  When it comes to breath-taking incompetence there are few better than Call Me Dave.  His latest wheeze was the introduction of minimum alcohol pricing.  Eh, excuse me, Prime Minister, does this not mean that the price of booze will increase when voters have had more than enough of price increases in general?  Oops – goodbye to all that.
Simple truths are simply stated – the Conservative Party led by Cameron is heading for sure defeat.  I was tempted to write that there are lies, damned lies and David Cameron but, on reflection, I think that’s unfair.  It’s better said that he is a little man lost in his own confusion.  Having no identity of his own he took on that of Tony Blair and the metro-cosmopolitans.  The Tory Party went mad when it elected him leader, much as Labour did when it elected Michael Foot.  The Cameron Manifesto is another of history’s long suicide notes.
The credibility of all politicians is pretty low these days, particularly those in the Conservative Party.  It gives me no pleasure to write this because I have only ever voted Tory – a long family tradition – and I have a great many Conservative friends.  But the Party has forfeited all credibility and all trust; people simply do not believe a word it says.  In fact the more Cameron and Osborne say the greater the disbelief.  These men are hopelessly out of touch.  The one great platform the government stood on was reduction of the public debt.  What’s happened?  It’s now more bloated than ever.  Some of the reductions we have had are beyond crazy.  Favoured socialist causes have been ring-fenced while defence spending is being slashed.  We spend millions on foreign aid while depriving tank regiments of, er, tanks.  This really is the political theatre of the absurd.
Can things get any worse?  Yes, indeed they can.    If people distrust the Conservative Party the Conservative Party distrusts itself.  Call Me Dave’s gay marriage scheme has introduced a huge fissure into the Party ranks, one I suspect will never be fully healed.  Nobody wanted this; nobody needed this except a loud-mouthed minority.  And when it came to standing up to Europe and the European Court of Human Rights the Cameron government is nothing but piss and wind.
Oh, yes, on the subject of wind we have what the Chancellor calls a ‘renewable levy’, a rip-off tax by any other name, one which will penalise consumers and cripple industry.  And for what?  Merely to placate another loud-mouthed minority, the green fanatics who are set on covering this green and pleasant land with ugly and unpleasant windmills.
I do not care what Osborne says in today’s budget (I wrote this piece before I knew the details) because it will make little practical difference.  The game is up.  There are simply not enough gay couples, greens and lovers of foreign aid to secure a future Conservative government.  Under Cameron the Tory Party has become a movement of faddishness and minorities.  In future it is likely to become the biggest minority of all.
Posted by Anastasia F-B at 16:59