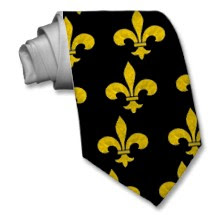 My partner’s off on a lengthy business trip to in the very near future.  Since he relies on me to buy his ties I thought I would do something slightly different. This time his neckwear will allow him to make a discreet political statement, rich in colour and a flash of panache.  I bought two, one a fleur de lis design, gorgeous in gold and black, the other the royal standard of the , also rich in fleur de lis imagery.  He will go to , bringing a personal Bourbon restoration.
I ordered these from Zazzle, an American-based online retailer of whom I had never previously heard.  They also do a nice line in Russian Tsarist designs, as well as communist-based themes, which I must order if he goes to , the former, of course, not the latter!
Their Imperial collection is a joy to behold, and I don’t just mean ties.  The catalogue has a range of Tsarist portraits, from Ivan the Terrible onwards.  They even have Peter II, Alexander II and Alexander III, though I doubt these particular rulers have much of a recognition factor, outside anyway, or, in the case of the first, even inside
The last Imperial family are well-represented, particularly Nicholas II as ruler, martyr and saint.  And, yes, there is a Grand Duchess Anastasia!  I was looking to buy Nicholas mementos and artefacts when I was in , only to discover that the market for these is mostly confined to , where the royal family are now interred in a special crypt in the Peter and Paul Cathedral.
I was disappointed at the time but now I have a chance to make good.  I shall ask for the last Russian autocrat to come west from republican to royalist .  There is surely some subtle symbolic and historical irony here.  I shall wear Nicholas with pride.  His Imperial Majesty, along with Anastasia, shall come with me on my next big foreign adventure, which is this coming October.
Will Nicholas have much in the way of recognition factor there?  I seriously doubt it.  If asked I will simply say it’s a portrait of my father.  There he will be, on my chest, looking more than usually regal.
My partner will be coming too, with or without his French royal ties, that is if he manages to avoid an encounter with Madame la Guillotine.  Ah, well, Vive le T! 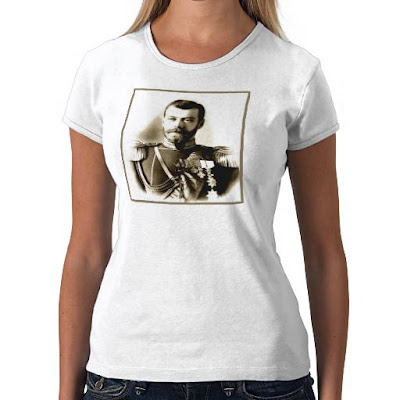