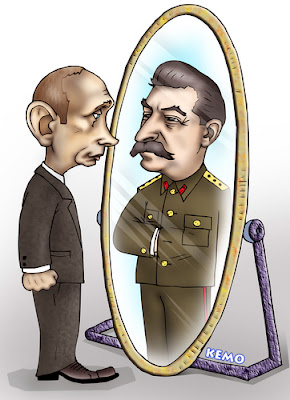 There is a scene in David Lean’s movie version of Doctor Zhivago where Lara, the great love of Zhivago’s life, disturbed by the howling of wolves close to the dacha where they are staying, says to Yuri that this is a terrible time to be alive.  It’s towards the end of the Civil War that followed the Bolshevik takeover in 1917.
It was a terrible time to be alive but neither Lara nor Zhivago knew just how terrible it was to become.  She herself was eventually to disappear at the height of the Great Terror, a nightmare yet to descend.  This, particularly the year 1937, the so-called Yezhovshchina, named after Nikolai Yezhov, then head of the security police, was the very acme of suffering.  It was the Golgotha of the ordinary people of , captured so memorably in Requiem, the poetic cycle by Anna Akhmatova.
Yezhov, Beria and the other apparatchiks of death and despair were only a front.  The beast at the heart of the labyrinth was Josef Stalin, conceivably the worst and bloodiest tyrant in human inhuman history, paranoid, vengeful and dangerous; a monster in monster’s clothing.
Stalin was just a communist Hitler, though in some ways even more vile.  But Soviet Russia, despite the dictator’s best efforts, was never defeated in war.  Unlike Hitler’s , it was never pulled up by the roots.  , even post-communist , has never had a proper reckoning with Stalin and Stalinism.  There has never been, and possibly never will be, a truth and reconciliation committee.  So much truth remains hidden; so many Russians are still in denial.  Even Khrushchev’s famed 1956 Secret Speech was but a partial break with the past.
Stalin, in a way, is the temperature of , rising and falling with the circumstances of the day.  Khrushchev’s denunciation saw a partial reappraisal of his legacy, little better than a renaming without a re-evaluation.  Khrushchev’s fall in 1964 was followed by the stagnation and sclerosis of the Brezhnev years, in which Stalin’s memory underwent a partial thaw.
For a period in the 1990s, albeit all too brief, it looked as if might finally come to terms with the full horror of its Stalinist past.  It was not to be.  For an instant saw freedom only to retreat into age-old slavery.  It was a depressingly familiar pattern, so brilliantly captured by Vasiliy Grossman in Everything Flows, a novel unfinished at the time of his dearth in 1964.  “The implacable suppression of the individual personality”, he wrote, “ - its total, servile, subjection to the sovereign and the State – has been a constant feature of Russian history.”
Stalin is back; the temperature is rising.  He is back in Putin’s , in a worse form than ever; he is back in a gangster state that does not even pretend to embrace an ennobling ideology.  He is back simply as an avatar of power, of the most demeaning and slavish forms of state worship.  The recent vindictive treatment of Pussy Riot, the female punk rockers accused of ‘hooliganism’, is but one small example of the new mood.
There is so much irony in ignorance.  In 2005, the sixtieth anniversary of the end of the Second World War, Stalin’s ‘achievement’ in leading the country to victory was lauded.  His earlier alliance with Hitler, a man in whom he placed implicit trust, and his gross errors in 1941, which cost so many Russian lives, was completely forgotten.  What a wretched fate to live with a partial memory.
Partial memory is the key to Russian history, the key to Putin’s approach to the past.  In 2007 his government decided on a restructuring of the national curriculum for schools, teaching children that the tyrant’s actions were ‘entirely rational’.  In the same year the archives of Memorial, an organisation set up to establish an accurate view of the past, were raided.  The police confiscated images of Stalinist atrocities along with twenty years worth of oral testament chronicling everyday life under the regime, as Emily Whitaker points out in the recent issue of History Today.
The following year a television company organised a national poll on the ‘Greatest Russian Ever’.  Stalin came third, despite pleas by the station for people to choose someone else, another remarkable piece of ignorance, inasmuch as he wasn’t even Russian.  The television executives would have solved their problem by disqualifying him on those simple ethnic grounds!
It’s a sure sign of things when tyrant kitsch is all the rage.  Just imagine Hitler watches and other tat on sale in .  Now go to .  No need to imagine: there is Stalin tat aplenty.
If Stalin is the mood in Putingrad, so are Stalinist policies.  New legislation been proposed, including increased penalties for violation of protest laws.  Non government agencies that receive international funding now risk being labelled as ‘foreign agents.’ The government is also being granted permission to censor certain internet pages.
To resurrect a putrid past shows just how morally abject the present regime is, how deeply sunk in dissimulation and lies.  With some noble exceptions itself is sunk deep in moral turpitude, especially tragic in that there can be few families without the victims of past wrongs.  This is a country, in short, suffering from a particularly degrading form of historical amnesia.
You were taken away at dawn’s mildness.
I convoyed you, as my dead-born child,
Children cried in the room’s half-grey darkness,
And the lamp by the icon lost light.
On your lips dwells the icon kiss’s cold
On your brow – the cold sweet … Don’t forget!
Like a wife of the rebel of old
On the , I’ll wail without end.
Posted by Anastasia F-B at 16:06