Let's Kill All the Lawyers 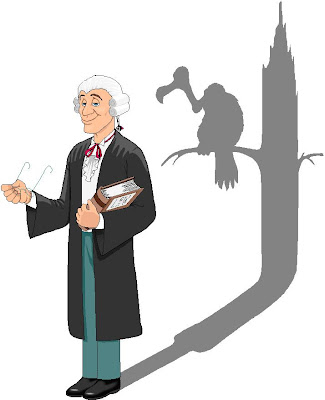 Henry the Sixth is probably the least memorable of Shakespeare's history cycle of plays.  It contains a particularly memorable line, though, delivered by one of the minor characters.  It comes in Part Two, Act Four, where Dick the Butcher, in responding to a speech by Jack Cade, the rebel leader, says "The first thing we do, let's kill all the lawyers."
You may very well know these words; a lot of people do.  I'm sure they struck a cord which the playwright's audience when it was first performed; people all too well aware of the frustrations and failures of interminable legal process, of the law's delays and of the insolence of office.
They've crossed my mind more than once, particularly on reading about some legal idiocy or other.  They came to mind most recently on hearing William Hague, the Foreign Secretary, pontificate last month about the value of our new legal world order.  "The British government", he announced, "will redouble our calls on all states to co-operate with the International Criminal Court (ICC) and apprehend those it has indicted.  There should be no hiding place or sanctuary for people indicted for crimes against humanity, war crimes or genocide."
Do you think politicians ever think?  Do you think that they pause for a moment's reflection before coming out with high-sounding and meretricious nonsense?  Oh, for the days of Machiavelli, days when political life was so much simpler, when states acted in their own best interests and not out of bogus moralising claptrap.
Now, please do not jump to conclusions.  I do not for a moment approve of crimes against humanity, war crimes and acts of genocide; I do not approve of leaders and states that are capable of such things.  But there are fundamental questions here, questions that clearly have never crossed the mind of vague Hague about .  Has International Justice - I feel compelled to write that in Olympian caps - done anything to deter dictators and perpetrators of genocide?  Has it not, in fact, made matters worse?  Is it not simply - what heresy! - a charter for lawyers?
The whole issue is addressed by Douglas Murray in the latest edition of the Spectator.  All I can say is that it's about time this was taken seriously.  There was Gaddafi, hanging on to the bitter end, at goodness knows what human cost.  There is Assad, hanging on to the bitterest of ends, at goodness knows what human cost.  What alternative is there, when the examples of 's Slobodan Milošević and 's Charles Taylor are there to see?  The ICC, in other words, encourages a bunker mentality.
The sensible thing, as says, would be to allow Assad to retire to a villa in or a bungalow in , a punishment, some might feel, befitting the crimes.  But, no; he has no hiding place: it's either swinging from a lamppost in or sitting on a bench in The Hague...indefinitely.  So, on we go - "By the worst means, the worst. For mine own good, all causes shall give way: I am in blood stepp'd in so far that, should I wade no more, returning were as tedious as go o'er."
The ICC has done nothing to stop genocide.  That's not really the issue.  Does it really want to stop genocide?  That is the issue.  After all, what function would it have in the absence of crimes against humanity?  Dictators and tyrants murder; that's their business.  The ICC produces genocide experts of all sorts; that's its business.  Universities are now apparently offering 'genocide degrees', so people clearly see a future in this growth industry. puts it persuasively:
Such people need jobs to graduate to, and there is now a growing professional class for whom the year is always 1939, the enemy is always Nazi and the answer is always .  Distrustful of armies, but endlessly reliant on lawyers, our national and international institutions now swarm with people who actively need accusations of genocide and crimes against humanity to stay in work.  Surrounded as they tend to be by unfettered praise, the actual effectiveness of these bodies goes almost unquestioned.  Even to resist the claims to supernational authority of the ICC - as the government has done - is to leave yourself open to accusations that you must be pro-genocide.
Yes, the first thing we do, let's kill all the lawyers.  Oops, I better be careful, least I find myself indicted in , there to suffer from interminable boredom, a punishment before than punishment that must surely qualify as cruel and unusual.
Posted by Anastasia F-B at 15:51