Death on a High 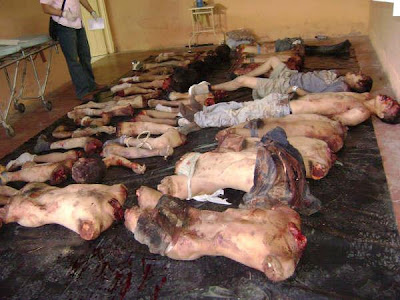 I was asked recently if I thought drugs should be banned.  The reference, in fact, was to substances that are already banned.  For me the answer is quite straightforward: whatever the moral issues are the banning of substances like heroin and cocaine has had disastrous consequences, even more disastrous than ’s flirtation with the prohibition of alcohol.
I had the example of in mind, a place where the so-called war on drugs has turned into a war, more barbarous and more savage than many more conventional conflicts.  The statistics are stunning.  To date more than 50,000 people have died in a mere six year period, ever since Felipe Calderon ascended to the presidency in December, 2006, with a promise to stamp out a perceived evil.  He made it worse.  At least 12000 children have lost one or both parents.  Several hundred thousand people have been forced to flee their homes, refugees in their own country, victims of a war in the middle of peace.
It’s not just the killing that’s shocking; it’s the ghastly nature of so many of the deaths.  Beheadings with chainsaws are now commonplace.  This is not just a war between the state and organised crime; it’s also a war within a war, with rival cartels involved in murderous vendettas against each other.  A lot of Americans seem unconscious of the sheer enormity of the problem south of the , a greater threat to national security and well-being than anything that might be happening in distant .
North America is the key, a huge and lucrative market that has acted as a spur to the drugs industry in Central and .  There is an obvious and terrible contradiction here.  There would seem to be no connection at all between the so-called flower children and peaceniks of the 1960s and 1970s, high on artificial highs, and grisly mass decapitations in , but the second is the corollary of the first.  Peace and love equals death and blood; it really is as simple as that.
For the outset the American government’s approach was wholly one-sided.  So far as successive administrations were concerned it was all a supply-side problem.  Deal with the producers, the reasoning went, then you deal with the problems as a whole.  So, in 1971, President Richard Nixon managed to persuade the Turkish government to clamp down on illegal opium production.  All that happened was that Mexican production was boosted still further.
In 1976 the US Air force sprayed poison on hundreds of square miles of Mexican marijuana fields.  Production simply switched to , giving the infant drug cartels in that country a massive boost.  When President Regan tried to end the importation of Colombian drugs through in 1982, the cartels simply re-routed their produce through .  As immigration and drug enforcement agencies have discovered, the border between and the is almost impossible to police adequately.
The problem gets worse by the day, aided by the fact that many ordinary Mexicans do not perceive the violent drug gangs as criminals but as part of the country’s long anti-state, Robin Hood or Zapata tradition.  For many Mexicans, mired in poverty, the government itself has long been suspect, not an agency for reform and improvement but a source of graft and corruption.  If the drug gangs are violent the state has often been even more violent.
Every year celebrates death in the Dia de los Muertos, the Day of the Dead, a Catholic holiday with Aztec roots.  But those grinning sugar skulls hide a grimmer reality.  Death is not confined to a single day.  Rather in Santa Muerte, Saint Death, the patron saint of the drug gangs, it is an immediate and ‘living’ presence, if such a paradox makes sense.  Santa Muerte has accompanied the heroin and cocaine across the .  She is making a home in the North, the avatar of an unacknowledged insurgency.
It will require a lot of political imagination and courage to break her grip.  Violence will only engender more violence.  Controlled legalisation would seem to offer the only way of undercutting the cartels and dispelling Death.  It would seem to be the rational solution.  Unfortunately politicians are rarely moved by reason.