A Question of Equivocation 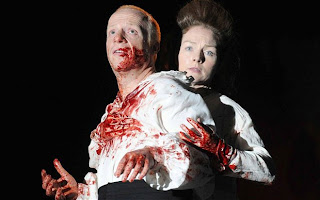 I don’t watch a lot of television.  In fact I hardly watch it at all; I don’t even have a television set in my rooms at college.  When I’m in London or elsewhere there is just far too much to do, places to go, people to see, books to read, premiers to attend, parties and more parties!  Besides most of what’s broadcast is complete rubbish, a form of death by entertainment, the kind of mind-numbing real live life shows anticipated with stunning prescience in The Year of the Sex Olympics, a play I wrote about here a couple of years ago (The Live Life Show, 9 June, 2010.)
I do, however, use catch up services like BBC iPlayer, just to make sure I’ve not missed anything worthwhile.  My viewing tends to be a bit sporadic, though, depending very much on what else is happening in my life.  I had some time to spare at the weekend and decided to see what was on offer.  I’m so glad I did because each broadcast has a limited shelf-life.
There was an excellent documentary by Professor Mary Beard on life in ancient .  It’s not that I want to talk about, though.  Rather it’s The King and the Playwright: a Jacobean History, presented by Professor James Shapiro.  Hitherto I’d never heard of Schapiro, an American specialist in Shakespeare based at .
It was quite brilliant, an exploration of the way in which the transition from Tudor to Stuart rule impacted on Shakespeare’s drama.  In plays like Measure for Measure, Timon of Athens and King Lear Shapiro shows how the dramatist, now part of the King’s Men playing company, both flattered and subtly criticised James I, the new monarch.
But it was in the second episode, touching on ‘equivocation’ that really opened my eyes.  In placing Macbeth, the Scottish play, in the context of English history, Professor Shapiro delivered a real wow-me effect.  He brought out contemporary nuances that I was completely unaware of, matters relating to the aftermath of the Gunpowder Plot.  For an American professor of literature to alert me to a novel dimension of English history really is something!
The key here is the word ‘equivocation’, which entered general usage during the early Jacobean period.  It acquired a particular resonance in the aftermath of the Gunpowder Plot, when a nation was beset by uncertainty, by fear of terrorism and the even greater fear of potential terrorism.
Even as the principle plotters were executed in January, 1606 the authorities continued to look for the mastermind behind a scheme that, if successful, would have killed not only the king but virtually the whole of the English establishment.  The man they alighted on was Henry Garnet, a Jesuit priest, who had been charged with keeping the faith alive in .  Now the Plot acquired a whole new dimension, implicating the Catholic community at large.
In the course of investigating Garnet’s alleged complicity a document was discovered, quite explosive, appropriately enough, on the question of equivocation – namely, the justifiable lie.  A Treatise of Equivocation was really just a guide for Catholics living in a hostile Protestant environment.  As Shapiro explains, it was a ‘how to guide’ for English Catholics, torn in their loyalties between the King and the Pope, on evading direct questions by subtle forms of dissimulation; lying, in other words, without lying.  The government had its mastermind.
The trial of Garnet was a sensation.  He was accused of being involved in not just the Gunpowder Plot but other treasonable schemes going back some fifteen years.  Equivocation was used as a fundamental part of the prosecution’s case.  In parrying the accusations Garnet said that even Jesus himself had equivocated, which doubtless deepened the offence.  The jury took a mere fifteen minutes to reach a verdict.  As a contemporary said, Garnet would equivocate even so far as the gallows, but he will hang, without equivocation.
Shakespeare, in his brilliance, caught both the word and the national mood in his new play – Macbeth.  Those who know the play will immediately call to mind the supposedly comic devil porter scene.  It’s night.  To the gates of Macbeth’s castle comes an unknown visitor, who proceeds to knock loudly at the door. The porter arises and enters into a mood of devilish reverie, as if at the gates of hell;
Here's a knocking indeed! If a
man were porter of hell-gate, he should have
old turning the key.

Knocking within
Knock,
knock, knock! Who's there, i' the name of
Beelzebub? Here's a farmer, that hanged
himself on the expectation of plenty: come in
time; have napkins enow about you; here
you'll sweat for't.
Knocking within
Knock,
knock! Who's there, in the other devil's
name? Faith, here's an equivocator, that could
swear in both the scales against either scale;
who committed treason enough for God's sake,
yet could not equivocate to heaven: O, come
in, equivocator.

Knocking within
Knock,
knock, knock! Who's there? Faith, here's an
English tailor come hither, for stealing out of
a French hose: come in, tailor; here you may
roast your goose.
Knocking within
Knock,
knock; never at quiet! What are you? But
this place is too cold for hell. I'll devil-porter
it no further: I had thought to have let in
some of all professions that go the primrose
way to the everlasting bonfire.
The whole play, which centres on a regicide, had a tremendous topical relevance.  The porter is alert to treason and equivocation.  James himself would have recognised who the principle equivocator was, the traitor who could not equivocate his way to heaven.
Macbeth is full of equivocation, of evasions in the face of the truth.  Macbeth equivocates, Lady Macbeth equivocates, dissimulation in multiple forms, high and low.  In the end Macbeth realises that he himself has been the victim of the witches’ equivocation;
I pull in resolution and begin
To doubt th' equivocation of the fiend
That lies like truth.
How carefully Shakespeare walked here.  To deal with such sensitive issues with such directness carried potential dangers.  A play centring on regicide might have been fatal in less skilful hands.  But Shakespeare balances equivocation with flattery, holding up a mirror to the king when the play touches on the issue of the succession.  Now the witches stop equivocating.  Macbeth sees into the future; he sees James himself; his treachery has been fruitless; the rightful line will prevail.  There is no more equivocation.
Posted by Anastasia F-B at 16:01