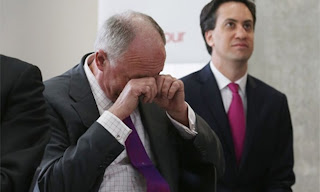 I was so glad on Saturday, so glad that, against all the odds, against a tidal wave of electoral hostility flowing over the Conservatives, Boris Johnson prevailed in the race.  I was even gladder, though, to hear Ken Livingstone’s final farewell, not so much swan as crow song.  At last is rid of this maudlin, self-pitying old narcissist, the worst thing ever to have been inflicted on the city.  Bye, bye King Newt; please take Polly Toynbee and all your other nauseating acolytes with you.  Never turn again; thou shall never more be mayor!
I wrote recently celebrating Boris, the best thing to happen to in years.  Now comes the time to write Livingstone’s epitaph, a farewell to arms for conceivably the most unprincipled flash harry ever to disgrace politics.  I became aware of him and his antics when he served as Mayor from 2000 to 2008.  By his friends I came to know him, and his friends included dictatorial thugs like ’s Hugo Chavez and ’s Fidel Castro.  It was tax payers who funded his trips to the latter’s communist paradise.  as ; that was his view of the future, and if you know you will understand just how bleak the future!
Livingstone, insofar as he has any principles at all, is a hard rock of the old hard left, a chip off the Berlin Wall.  His ideas are all in the past, washed up on a shore of ideological failure.  With the fall of the old Soviet bloc he was one of those socialists who had lost an empire but not yet found a role.  It was fashionable leftist causes at one turn - rainbow alliances and what have you - and radical Islamists at the next.  He could preach homosexual rights and then embrace reactionary Muslim clerics calling for the death of homosexuals, with no apparent sense of the contradiction.  You see, it was all for the greater good of Ken.
In the course of a disastrous mayoral campaign he cynically tried to appeal to Muslim voters in the manner that George Galloway did in the Bradford West by-election.  A good many people I came across in the course of the contest, not all natural Conservative supporters, were sickened by his antics and his opportunism.  Boris had the capacity to charm everyone; Livingstone, I hazard, charmed no-one, not even those who voted for him.  Who could not feel sick watching him weep at a party election broadcast which he claimed represented the view of ordinary Londoners when it turned out to be paid ‘supporters’ reading from a script.  There is really no end to the newt’s cynicism.
His is the Socialism of Fools, and I feel sure that some people will understand the reference.  He could sneer at the rich, especially rich Jews (in his mind all Jews are rich).  He could rage against tax avoidance, only to be embarrassed by a revelation that he, too, was a tax avoider, paying a lower rate than any of his rivals in the mayoral contest, paying a lower rate than a good many of the Londoners he expected to support him.  This hypocrite-in-chief went so far as to reach for the rich person’s gambit – he set up a company to reduce his tax liabilities.
All in all his election campaign, conceivably the worst ever by a major politician, was disaster hard upon gaff hard upon disaster.  The more time went by the more hollow, tired-looking and self-pitying he became, promising everything to everyone if only he could get back into office.  Who was to pay for all his lavish promises on public transport fares on what have you?  Not Ken, I can guarantee that munch at least.
I read in the Sunday press that he was bullied at school.  All I can say is he wasn’t bullied enough!  Farewell to corrupt Tammany Hall-style politics; farewell to cronyism and junkets, farewell to all of the old tired shibboleths, farewell Hugo Chavez and Yusif Al-Qaradawi.  has seen the last of Ken Livingstone and his causes, the last of the sad old whinger.  Hurrah!
Posted by Anastasia F-B at 16:54