The Hammer of Prejudice 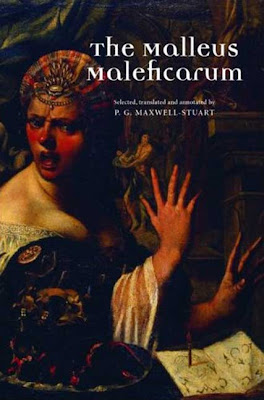 I’ve cobbled together some thoughts on the Malleus Maleficarum – literally the Hammerer of the Witches - , one of the most infamous texts ever written on the subject of witchcraft. What follows is entirely impressionistic rather than a detailed exposition or a review as such; so please do bear that in mind. Besides, I’m not quite sure that a review of a primary text like this is in any way meaningful.

I’m assuming, though, that most of the people who glance at this article have never actually read this notorious book. So, if there is anything that is not clear, or if you would like to know any more, I will do my best to tackle any questions that you might have.

The book, of course, was originally published in Latin, translated twice into English; first by Montague Summers in 1928, and more recently - and accurately - by P. G. Maxwell-Stuart. The text I am referring to here is the latter, published in paperback by Manchester University Press in 2007.

Anyway, the Malleus first appeared in 1487 under the name of two Dominican inquisitors: Heinrich Kramer, usually known by his Latin name of Institoris, and Jacob Sprenger, though it is generally thought that Kramer was the sole author.

Those of you who know little of the nature of the great European Witch Hunt may be surprised to learn that the Catholic Church was originally highly sceptical about the whole phenomenon of witchcraft, a position reflected in canon law. The Malleus was composed specifically because Kramer had been frustrated by the failure of the prosecution of a group of alleged witches in , a process in which he had been personally involved. The task of his manual - that is how it is best conceived - was both to provide a scholarly defence of the heresy of witchcraft - it is important to understand that is how Kramer conceived the practice - and to provide guidance for inquisitors and legal professionals in the pursuit and prosecution of witches.

I would like to say that the book stands in relation to the Witch Holocaust as The Protocols of the Elders of Zion does to that of the Jews.  Yes, I would like to say it but I know, contrary to a more general prejudice, that this is a gross exaggeration; for it was only one of a number of similar texts, and by no means the most popular. It did, however, have a percolating effect, steadily influencing a large section of scholarly opinion on the matter, both before and after the Reformation.

So far as Kramer was concerned witchcraft was a huge diabolic conspiracy against Christendom, a terrorist threat, if you will, with Satan in the role of Osama Bin Laden and the witches as his agents. Witches were not ignorant of the faith, like Muslims. Rather they had chosen the deliberate path of apostasy and heresy, all the more dangerous for this. The diffuse nature of the practice - also like contemporary terrorism - made it a particular and pervasive threat.

The Malleus itself is by no means an original work, rather bringing together in one place a whole series of past opinions and judgements on the nature of malificiendum or harmful magic. Kramer’s unique contribution was to identify this principally with women, for the simple reason that witchcraft for him was a crime founded on carnal lust, and women, in his view, were more susceptible to this than men. For Kramer the most powerful class of witches, whose crimes included the killing and eating of their own children, all practiced “copulation with devils.”

It would be wrong to assume, as often is, that the work is specifically misogynist; it does little more than reflect many of the prejudices of the day. Rather it was the carnal susceptibilities of women, their weakness in the face of temptation, which made them the Achilles Heel of the Faith. Kramer even argues, on the basis of a bogus etymology, that ‘femina’ comes from the root ‘fe’ and ‘minus’, meaning less of faith. It was this that made many females, those who chose the perverse path, to be liable to demonic seduction. In short it was the infidelity of women that could and did, in his mind, lead to perfidia, a betrayal of the Faith. This was not inevitable, but women needed all the help they could get to keep the dangers posed by their carnality under control.

The ideas presented in the Malleus gradually seeped downwards, linking witchcraft with diabolism in the popular mind, thus divorcing the practice from an older and less malign root. In this in made an important contribution to the forms of hysteria that formed such an important part of the psychology of the Burning Times.

So, this is what I would like you to hold in mind: that for Kramer and many of his contemporaries, witchcraft, linked with the Devil, was a malevolent form of supernatural terrorism. This was the essential fuel of the witch-hunt, then and in all subsequent times.
Any rating here, like a rating of a work like Mein Kampf, also seems gratuitously unnecessary, serving almost like a papal imprimatur!  I can assure you that I do not approve of the contents of this book.  But I will rate it at four stars simply because it’s a work that really should be consulted by those who have any interest at all in witchcraft, past prejudice and a darkly important phase in European history.  My rating, however, is more a reflection of the package offered by Maxwell-Stuart.  Not only is it a vast improvement on past translations but it comes with a superb introductory essay. I think it only fair to add that if you are looking for something, lurid, dark and racy the Malleus is bound to disappoint.  It is crushingly dull!  Or is that just witchy prejudice?  :-)
Now she rests!
Posted by Anastasia F-B at 16:49