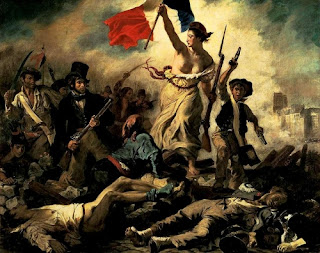 A spectre is haunting , the spectre of anti-Europe!  It’s just so fascinating to watch political developments on the Continent, watch increasing dissent over the whole tawdry European ‘ideal.’  It extends even so far as and the , two of the original six nations who grouped after the Second World War to form the , now the European Union.

In 2005 the electorate of both of these countries rejected the constitutional treaty devised at .  No matter; they were ignored by the political class, who proceeded as intended with an act of legerdemain, a treaty that was not the treaty, a constitution that was not the constitution.  But the dog has stopped growling; it’s now biting.  The recent fall of Prime Minister Mark Rutte shows just how unhappy the Dutch are with the EU.  In , with all in a flux as the second round of the presidential election approaches, even that slimy opportunist Sarkozy has suddenly acquired anti-European credentials.
Here Gordon Brown, the former Prime Minister, once made a speech in which he promised to create “British jobs for British workers.”  It was a more than usually stupid sound-bite which immediately bit him on the backside.  The reality, under the new , as he himself must have known, is that no political leader can guarantee the insularity of the domestic labour market.  In the months after his speech the number of foreign workers rose by 175,000 as the number of British fell by 46,000.  There are, in other words, far too many Polish plumbers.
As austerity bites even deeper even the endlessly tolerant Dutch have opened to this fact.  There Geert Wilders, leader of the Freedom Party, even has a website where people can complain about Polish migrants.  In , too, there is mounting anxiety, something Sarko has latched on to, particularly among the low skilled and poorly educated, those most at risk from increased foreign competition for jobs. The Poles can come to and the but the French and the Dutch can’t go to , or, rather, they can, if they want to end up jobless and homeless on the streets of or .
The future does not look good for the single-marketers, for those who want to base this single-market on a central fiscal discipline.  The tighter euro budgets become the angrier national electorates.  The coming Greek election, scheduled for 6 May, is guaranteed to show just how deep this resentment is.
The evidence is also there in and the , with more and more voters veering towards parties of the right or the left that are opposed to further European integration.  Add to this the impact of globalisation, which has compounded the problem of sapping wages and diminishing opportunities.  European leaders, the Economist reported recently, are worried by the rise of extremist and populist parties.  It’s their actions, their pursuit of policies that ordinary people neither voted for nor wanted, that has created the best opportunity for such extremism in decades.
You see, electorates can be ignored; they have been ignored, time and time again.  But there are consequences here.  The European Union was formed in part out of fear of German revanchism.  The only alternative to the EU, as Chancellor Merkel more or less suggested not so long ago, is a German invasion of .  With the EU we have just the reverse: a Polish invasion of the West!
Scheitert Europa? - Is failing? - the German daily Handelsblatt asked in a front page headline recently.  I certainly hope so; for the alternative is too frightful to behold.
Posted by Anastasia F-B at 17:10