Memoirs of an Anti-Semite 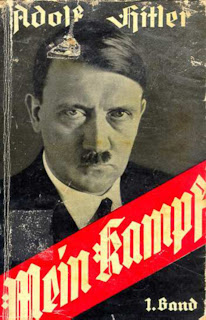 The Times reported last week that Mein Kampf is shortly to be reprinted in , the first time since 1945.  The article itself was accompanied by a wholly gratuitous commentary from one Ben Macintyre, headed Illogical and evil nonsense – read, gasp at it and bin it.   That just about sums up the content of the piece.  Macintyre is not opposed to publication; he just blows a rather hysterical fanfare – ‘badly written’, ‘turgid’, ‘illogical’, ‘boring’, ‘evil nonsense’ and on and on.  Why bother reading it at all?  Macintyre has read it for you!
Time, I think, for me to revive an earlier comment I made welcoming the prospect of the first new German edition since the fall of the Third Reich.  I knew the copyright, held by the state of Bavaria, which for long refused requests for republication, was scheduled to run out next year, a fact that I found quite pleasing.

Why was I pleased? To begin with I should say that, so far as I am concerned, the banning of books, books with a political message, no matter how repellent, is always wrong. But more to the point, Mein Kampf is an honest political statement, perhaps the most honest ever written by a politician. One only wishes that it had been taken more seriously at the time. It certainly was during the early days of the Cold War, when Western writers scoured the speeches of communist leaders, gathered and published with such dubious titles as Khrushchev’s Mein Kampf.

Hitler was eventually to recognise how unnecessary, how dangerously unnecessary the book had been as power became a realistic possibility, distancing himself from parts of the message in the early ‘moderate’ days of the Third Reich. He wrote a second book in 1928, this time focusing more directly on his foreign policy aims, which was buried during his days of power, only published after the war with the English title of Hitler’s Secret Book.

You see, for Hitler the spoken was always more important than the written word. It’s virtually impossible to quantify but I would hazard that that while Mein Kampf may have converted thousands- and I do stress may - the speeches converted tens of thousands. Indeed, Mein Kampf is more likely to have discouraged any potential convert by its convoluted and rambling message. If racist and fascist groups promote it today it’s because it’s Hitler’s ‘book’, a kind of icon, not because it has any real political power, any proselytising power.

Publication was banned in this country for more than twenty years after the Second World War. Republication in 1969, in an edition edited by D. C. Watt, was opposed by all sorts of people, for all sorts of reasons. It was opposed, I believe, by some Jewish groups. I can understand this. At the time the crimes of the Nazis must still have been raw in a lot of minds. Yes, it was understandable but misguided. Father bought Watt’s edition while he was still at school.  He told me that it was the dullest thing he had ever read, duller even than !

“Oh, that my enemy would write a book”, really is the guiding thread here. Well, he did, and it reveals much more about him than he ever intended, much more about his inner psychosis; reveals more about his intellectual and mental confusion than he could ever have imagined. That is the crucial thing. Publication in was opposed by Jewish leaders. It’s a sign of how things have moved on, how understanding has grown, that publication in has been backed by Jewish leaders.
Oh, I should also say that, contrary to Macintyre’s view and contrary to what you might have heard, Mein Kampf is actually quite readable if clumsy and ill-organised, the meanderings of a semi-educated high-school drop out.  You might very well read it; I doubt very much if you will gasp at it.  It’s unlikely to give you any greater insight than you already possess.
Posted by Anastasia F-B at 15:52