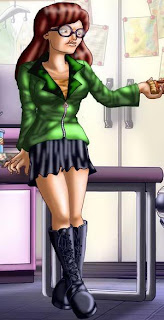 If you were a cartoon character, who would you be?  This is a question I addressed myself to recently.  I did not have to hesitate before answering.  There is only one choice for me – Daria!  Daria, if you’ve never heard her, is the eponymous heroine of an American animated television series created by Glenn Eichler and Susie Lewis Lynn for MTV. The series focuses on Daria Morgendorffer, a smart, acerbic, and slightly misanthropic teenage girl who examines the world with dry, cynical humour.
Running over several series at the turn of the century, it was my favourite cartoon show by far when I was in my tweens and teens.  Here was a character I could really identify with, someone who stood apart, a character who could see through the shallow pretences not just of her own peer group but of the adult world in general, a character who could dissect and analyse life with forensic insight.
The show itself is a satire of American suburban life, with Daria commenting on the various absurdities she encounters in an amusingly sardonic fashion.  It was a pattern I adopted for myself, my own particular form of assertion and rebellion.  As I’ve matured I have, perhaps, become a little more accepting and a little less biting but there is still so much to be cynical about, so much foolishness to challenge.
It seems to me that the best way of dealing with life’s frustrations is to develop a sense of detachment.  I do get angry with some of the more outrageous things that I see around me, I get angry at the shallowness and banality of so many of our politicians and public figures.  But it is not in my nature to campaign and protest.  Or, rather, such campaigning and protesting I do is through the medium of words.
I love words and I love language.  I love to express my thoughts, to take arms against a sea of crassness and by opposing have a spot of impish fun.  Ana the Imp is my vehicle, a platform that has allowed me to sharpen my wit through observation and comment, to praise what is worthy of praise and expose what needs to be exposed. I’m a devil with words, I know, and this devil likes to dance!
Loving words I also love to debate, something I’ve been doing since my school days.  I do not take prisoners, as some have found to their cost, and I have no hesitation in exposing folly, in exploiting weakness and stupidity when it deserves to be exposed.  Debating for me, you see, is just war by other means.
OK, as I get older I begin to dissimulate a little more than I used to; I begin – heavens help me – to equivocate!  That’s truer of my personal life, of my relations with other people.  A certain amount of equivocation will always be necessary in this area, for the sake of harmony, if nothing besides.  But on the wider issues, the fashionable nonsense that pollutes so much of existence, be it windmills or gay marriage, there is no room for equivocation.  Irony is my weapon, one I will continue to use with ruthless precision.  Daria would expect no less.
My advice is stand firm for what you believe in, until and unless logic and experience prove you wrong. Remember, when the emperor looks naked, the emperor is naked. The truth and the lie are not "sort of" the same thing.
Daria Morgendorffer
Posted by Anastasia F-B at 15:55