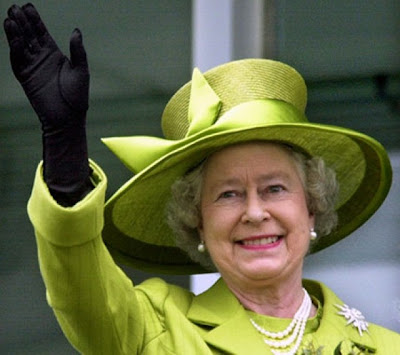 She was only eleven years old when she was confronted with her future destiny.  It wasn’t something she wanted or welcomed, a little girl interested in the things that little girls are interested in.  For many nights thereafter, as she told her grandmother, her mother’s mother, she prayed for a little brother, someone to come and relieve her of the burden.  Her prayers, thankfully, were not answered.  She was Lilibet; she became Elizabeth; she is our Queen.
England is having a party.  This week we celebrate the Queen’s Diamond Jubilee, sixty years on the throne, only the second time in our history that we have seen such an occasion, the first being for Queen Victoria in 1897.  But then Victoria, for so long in morbid isolation and declining in health, was the ghost at the party, the ghost of a passing age.  Not so Elizabeth, as active, as involved, as committed and as dutiful as ever.
It was in 1947, when she was only twenty-one years old, that she made a promise to Britain, to the Empire, to the Commonwealth and to the world.  She was in South Africa at the time.  With the radio microphone before her she said “It is very simple.  I declare before you that my whole life, whether it be long or short, shall be devoted to your service.”  It was five years later she came to the throne, suddenly and unexpectedly, following the death of George VI, her beloved father.
And so it has been.  The Empire has gone, falling away bit by bit, but for the most part without bitterness or acrimony.  One by one former colonies emerged as self-governing republics, though still bound together with Britain in a Commonwealth of interest and affection for the Queen, a rock and a symbol above all petty politics.  I remember when I was in Uganda, there told of a past state visit, when the people of Kampala came out to greet Her Majesty in thousands.
We should be grateful for all that she represents, for her continuity and for her strength.  I have the latest edition of the Spectator in front of me.  There, on the front cover, she can be seen in an illustration by the cartoonist Peter Brookes,  She is looking at portraits of all of the Prime Ministers of her reign, right back to 1952.  There are twelve in all, counting Harold Wilson’s two ministries as one, beginning with Winston Churchill (he headed a post-war ministry) and ending with David Cameron.  I say ending but I am convinced she will see more before the day is done!
The Queen quite simply is the Queen, recognised as such across the world.  Even in the United States, where she has never reigned, she has an approval rating of over 60%, far in excess of the President, having long since made up for the perceived misdemeanours of her ancestor George III.  Even in England, as we have moved from an age of deference to an age of vulgarity, she has stood like a rock, one upon which every republican tide has broken.
We challenge the institution of monarchy at our peril.  It defines who and what we are in this country.  I revere Queen Elizabeth not for what she says, or what she believes, or what she does – it’s simply for who she is and what she represents.  She is consistency and stability in the midst of change.  We have come to despise politicians as much as we revere the Queen.  The very idea of a republic with an elected head of state, a Tony Blair or a David Cameron, would, I imagine, give most English people nightmares.  It certainly gives me nightmares.
Yes, we challenge monarchy at our peril.  I was eleven years old when Princess Diana died.  I still remember the mawkish outburst of sentimentality; I still remember the displays of emotion that shamed this nation, shallow, gay and fey.  I still remember my grandfather’s comments on the irresponsibility of the press, voicing gratuitous criticisms of the monarchy in general and the Queen in particular.  Once again it exercised the prerogative of the harlot throughout history: power without responsibility.  Elizabeth II survived it all; she survived the fashions of a season, growing stronger, the People’s Monarch in a deeper sense than the ghastly Tony Blair could ever comprehend.
I’m under no illusions about our present condition and future predicament.  I do not share the sentiments of Boris Johnson and others in the press in their over-the-top celebration of a new Elizabethan Age.  This is an age of decline; we have, with the brief intermission of Margaret Thatcher, been in decline as a nation for decades.  The future does not look good, shackled as we are to the Sick Man of the European Union.  But, for a moment or two, we shall take time out; we shall enjoy the spectacle of a wonderful pageant on the Thames. We shall fiddle while Europe burns!
Anyway, I am getting set to carry the good news from England to Italy.  I leave tomorrow morning, spending my Jubilee week in Rome and Florence.  Have a super time, one and all, and declare with me, Vivat Regina! Vivat Regina Elizabetha! Vivat! Vivat! Vivat!
Posted by Anastasia F-B at 12:54