Getting Ready for Zombie Armageddon 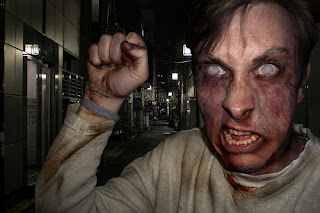 OK, then; you’ve covered every contingency for the coming zombie apocalypse.  You have a good supply of food and water stored away.  You have your armoury all prepared; a shotgun or several and perhaps a collection of power tools and other useful implements.  You are an island; you are Legend.  Stop; think again; this is not the best way to save yourself or humanity from the contagion!

If you are taking this threat seriously – and who does not? – you really should have been in the town of Cheltenham in the west of England last week to hear Doctor Austin, a Theoretical Zombiologist (yes, that’s right), speak at the annual science festival.  Dr Austin, head of the Zombie Institute for Theoretical Studies (ZITS), was most illuminating.  “There are a lot of misconceptions about zombies”, he said, “If a zombie does appear, people need to treat them as a person with an illness.”
Right.  There are other things that you might not be aware of; in fact I’m virtually sure you are in total ignorance, as was I.  Do you think that zombies have rotting flesh?  Well, you are wrong.  The thing is, you see, if they did they would, well, not see.  They would, in other words, decompose quickly beyond their ‘best before’ rampage date.  Dr Austin rightly pointed out a zombie whose eyes had been eaten by maggots would not get very far.  He went on to say that;
Once you become a zombie you will live for three to six months.  The time will vary depending on age weight and whether you live near people with chainsaws.
The good doctor continued in this vein, explaining that the apocalypse will be spread by biting, a practice the scientific literature agrees that zombies are particularly keen on. There would seem to be obvious similarities to rabies.  Hey, but hold on a minute; other zombie symptoms, shuffling, moaning and generally not caring much about one’s appearance, suggests another comparison.  Yes, indeed; we are in the realm of Variant CJD, more popularly known as Mad Cow Disease.  In future it may very well be called Mad Zombie Disease, MZD for short.
Actually, all kidding aside, ‘Dr Austin’, who mostly lectures to schoolchildren, was making serious points about biological science.  The zombie format of his talk was really just a hook to get people interested in different aspects of virology;
Usually when you lecture on illness someone in the audience might have had it, or been affected.  Because there are no zombies at the moment, no one is going to be upset and say, “Oh, my mum died of that.”
At the moment?…hmm; what on earth is he going to talk about when they do appear?  I suppose werewolves or vampires might serve as a possible alternative.  On second thoughts it probably won’t matter.  After all, we will be far too busy careering through the streets or hiding away in attics to attend science festivals, no matter how illuminating.
On further reflection I’m not at all sure about Dr Austin’s credentials, or with what authority he speaks on behalf of ZITS.  He says that there are no zombies at the moment, which leads me to suppose that he might very well be a zombie himself.  If I could only rid myself of that unhappy thought I would gladly take him by the hand and lead him through the streets of .  I’ll show him something that’s bound to change his mind. 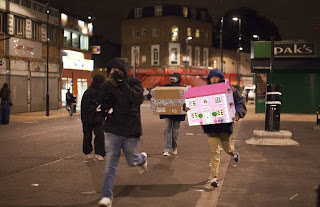