Dreaming on a Midsummer Night 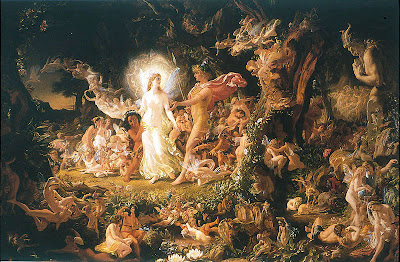 This has always seemed like a magical time of year to me, Midsummer, the Solstice, Litha, whatever one wishes to call it; it has ever since I saw a performance of Shakespeare’s A Midsummer Night's Dream when I was eight years old. The Sun is now in the sign of Cancer, my birth sign, the sign of the Moon. The magical forces are now at the height, and Robin Goodfellow puts a girdle round the Earth!

This was a time when witch-hunters of the past claimed that witches rode out to meet Satan, whereas the real witches, not the monsters of imagination, simply gathered to renew their sacred bond with the earth, to celebrate its bounty and fertility. It was a time also for gathering magical plants, a time when they were at their most potent. Russian witches use to harvest those which grew on the top of , considering them to be the most powerful on Earth.
A Midsummer Night’s Dream is by far my favourite Shakespearean comedy, light of touch and light of heart, rich in all sorts of magic, a world of fairy visions.  And it just so happens that one of favourite paintings touches on the very same themes.  It’s The Fairy Raid: Carrying off a Changeling on Midsummer’s Eve by Joseph Noel Paton, a nineteenth century Scottish artist who painted in the Pre-Raphaelite style.  He is better known for The Quarrel of Oberon and Titania but for me The Fairy Raid is just sublime.  The technical proficiency is astounding but there is far more here.  This is a vision that could only have come of a true love of the Realm of Faerie. 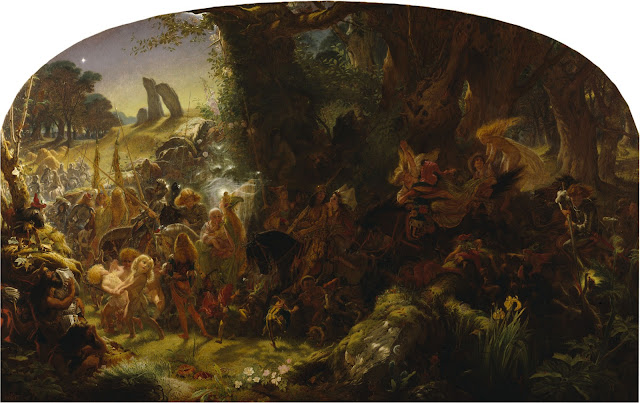