How Many Camels is Obama Worth? 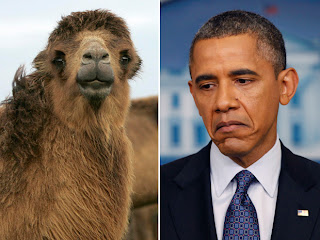 Al-Shabaab, the Somali offshoot of al-Qaeda, has offered a bounty of ten camels to “whoever reveals the hideout of that idiot Obama.”  It’s their response to the US State Department's recent announcement of a reward of several million dollars for information on the whereabouts of the movement’s leadership.
I wonder, perhaps, if the Somalis are being a little too generous in their assessment of the beleaguered President’s worth.  Ten camels seems excessive for a man who recently said that the American private sector was “doing fine”, an assessment, I would hazard, not quite in keeping with the experience of most people struggling with the economic realities of Obama World.
I wonder also what ordinary Americans make of their president’s worth.  While pondering this deep question they may perhaps consider what they themselves are now worth after four less years.  Unfortunately I can’t give the depreciation in round camel figures but the dollar value is alarming enough.  The Federal Reserve report published at the end of last week shows that the net worth of a typical middle class American family has fallen from $126,400 in 2007 to $77,300 today.  I’m guessing that’s a heck of a lot of camels.
The Dear Leader, struggling to turn attention away from the dire state of the debt-laden economy, says that faces a straight choice between him and a return to the policies of George W Bush under Mitt Romney.  What would that involve exactly?  Why, spending trillions of dollars that the country does not have, open-ended, expensive and unwinnable foreign wars, an escalating economic downturn, slow job creation and ever more layoffs.  Wait a moment – I’ve just drawn a picture of the last four years.  Vote Obama and get Bush?  No, vote Obama and get Obama.
The President’s negative campaigning calls to mind the concluding lines of Hilaire Belloc’s poem Jim.  Do you know it?  If not it goes like this – “And always keep a-hold of nurse for fear of finding something worse.”  Could things get any worse than they are at present?  It hardly seems possible.
Just think about it, think about the last four years.  Obama’s attempts to stimulate the economy – more trillions in the black hole – stimulated next to nothing.  His health care reforms are of such prodigious complexity that they would even defy the intellect of Einstein.  He was awarded a peace prize for no peace.  His foreign policy initiatives have spluttered and died.  He has alienated , ’s one true friend in a troubled region.  His campaign is creeping towards an ignoble end.  If that’s not bad enough I now understand that America has been covertly arming militants in Syria, seemingly blind to the fact that the Islamists among them have been involved in a murderous pogrom of local Christians.
But it’s never Obama’s fault, oh no, it’s always somebody else.  His White House motto clearly has to be the buck stops anywhere but here.  Meanwhile on we go.  It’s never mind the economy, stupid - it’s legalising the residency of illegals; it’s gay marriage; it’s a kulturkampf with the Catholic Church; it’s all sorts of trendy liberal causes that are just so meaningful to Americans in the midst of their present presidential woes.
Al-Shabaab should really devote those camels to better ends.  , though, may feel it’s got the better of the deal.
Posted by Anastasia F-B at 16:52