Public Enemies, or how I just love John Dillinger! 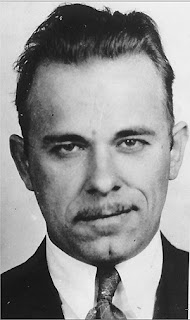 Public Enemies, directed with considerable panache by Michael Mann, tells the story-or part of the story-of John Dillinger, a bank-robber of Depression-era America, so notorious that he was labelled ‘public enemy number one’ by J. Edgar Hoover, then director of the emerging FBI. Johnny Depp does a first class job in bringing Dillinger to life as the perfect American anti-hero without, it seems to me, drawing on ‘tough guy’ or gangster stereotypes. Dillinger himself turned into a sort of folk hero when he was alive, because he robbed banks rather than customers, if that makes sense. And, as we all know, it’s so easy to hate banks and bankers!

Setting aside Depp’s performance, and the performance of a number of his co-stars, including our own Stephen Graham as Baby Face Nelson, another iconic figure of the day, Public Enemies appealed to me for another reason: it captures with much attention to detail a particular era in American history, an era on the threshold of change.

Dillinger and his kind represent, if you like, a late flourishing of the old Western outlaws, the freelancers of crime, increasingly an anachronism in their own time, a time when law-enforcement, in the shape of the FBI, was not only acquiring a much more professional and nation-wide significance, but also where crime itself was being professionalised. In the movie Dillinger is shown not just as a threat to public order but an embarrassment to the new-style of crime boss, worried by the impact of the old-style bandit; worried that the new forms of crime-fighting that they occasioned would be bad for a business that was essentially faceless.

OK, yes, the movie does glamorise Dillinger, a man who was, after all, a thief and a killer. Even so, he had a sense of style and a significant degree of personal charm, careful never to completely alienate the American public at large (he refuses to get involved in kidnapping because of the negative perceptions it carried). His charm, the charm of the man, contrasts with contemporary criminals like Bernie Madoff, the magnitude of whose misdemeanours is only exceeded by the scale of his mediocrity-and his appalling dress-sense!

I suppose the chief criticism I have is that Depp, good as he is, never really gets below the surface of Dillinger: there is little in the way of introspection and development. Also, although Mann lovingly creates a sense of time and place (even the newsreels look wooden and authentic!), to me it appeared just a tad too attractive and well-healed, with all those beautiful 1930s fashions! Dillinger, in other words, is a Robin Hood without the suffering peasants; The Grapes of Wrath is clearly being played out somewhere off-screen! Where is the guy who asks buddy for a dime? Still, I enjoyed it tremendously, these quibbles notwithstanding. It was a good story of bad people!

And, yes, I would be Billie Frechette to Depp’s Dillinger any day. 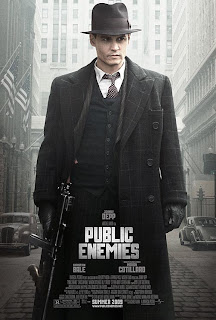