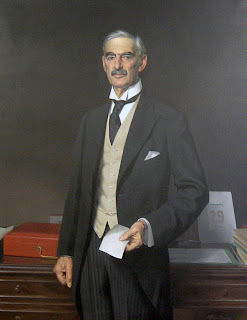 Churchill said that an appeaser is one who feeds a crocodile, hoping it will eat him last, a criticism of the policy followed by the government of Neville Chamberlain in 1938-1939. He was, as always, demonstrating his mastery of English prose, always managing to coin a striking phrase. But his assessment of Chamberlain's motives, of the intention behind appeasement, is woefully inaccurate. It always was.

Chamberlain's intention was to preserve the peace; to sacrifice only as much felt had to be sacrificed in this process. At the time it was considered by the vast majority of people to be an entirely reasonable position. Only in retrospect does it seem to be morally bereft.

There were three separate roads to the preservation of peace: collective security through the League of Nations; an alliance with the anti-Axis powers outwith the auspices of the League; and appeasement.

By 1938 there was little confidence in the authority of the League. It had coped with the 'little crises' in its early years, but the 'big crises' of the late 1930s were quite beyond its power and its authority. "What country in Europe today if threatened by large power can rely on the League for protection?” Chamberlain asked in Parliament in March 1938. The answer was obvious to all, "None."

What, then, of an agreement among the powers to arrest German expansion? The United States was effectively precluded by the Neutrality Act of 1935, which in practice limited President Roosevelt to expressions of sympathy alone. Britain and France stood side by side, though by no firm treaty of alliance. France was certainly still a strong power in military terms, though no longer what it once was. Besides, many British Conservatives held the Popular Front government in deep suspicion. Even if the French had been prepared to act, and there is no guarantee of this, the country was seriously weakened at the time by industrial, social and political conflict.

The Soviet Union was a possibility. Stalin had been deeply unsettled by the Nazi seizure of power in Germany, which came in the face of the Comintern's ultra-left Third Period strategy, seriously weakening his position in Europe. Thereafter he became a late convert to collective security, with the Soviet Union joining the League of Nations and entering into the Franco-Soviet pact in 1935. No territorial concessions were demanded as part of this bargain.

However, for Chamberlain and his party, Soviet Russia was not a reliable partner, and not just for the obvious political reasons. In 1937 the Soviet officer corps was all but destroyed in the purges, leaving justified suspicions of the effectiveness of the military.

So, in the end, appeasement was the policy of political and strategic realism. It was based on an illusion, of course, a misreading of Hitler and his true intentions. But it had the press and it had the nation behind it, Churchill's Cassandra-like warnings notwithstanding. Even Lloyd George was convinced of Hitler's honourable intentions. Besides, what was the alternative: Churchill and war? If Britain had gone to war in 1938 it is almost certain, on the basis of the information that we have, that defeat, real defeat, would have followed. Appeasement, if nothing else, bought time.
Posted by Anastasia F-B at 01:54