Sex Goddesses-Oh no they were not! 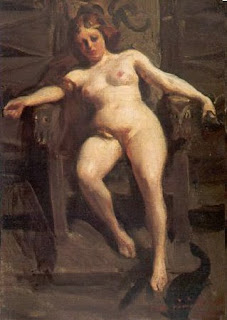 Yet another good piece I came across by the delicious and talented Bethany Hughes, historian, author and my perfect role model! It begins with the following statement;

Every Pagan season the priestesses of Avalon meet in Glastonbury to worship “Goddess.” As they point out: “this is not New Age religion, if you want something New Age go to the Catholic Church. We’ve been worshiping our Goddess for 30,000 years”.

They could have a point. Female figurines appear in the archaeological record from around 29,000BC. The Venus of Wildorf is the most famous. With her oval, full breasts, rotund stomach, wide thighs and faceless head, she has been taken to represent the enigmatic power of a sublime female force.

Well, yes. The figure was given that name by Josef Szombathy, he excavator, in the early 1900s and has been accepted as a divine symbol ever since. But, Bethany asks, who is to say if she is divine, if the many other such figures are divine, rather than human? It is now thought, by the archeologists working in this area, that such figures represent real women giving birth, depicted in the knees-up squatting position. At the execrations of a Copper Age site near Paphos in West Cyprus a terracotta model of a pregnant woman has been found wearing one of these figurines, presumably as a practical example and mentor!

There are also questions being raised about other such assumptions. The ‘Snake Goddess’ of Knossos on Crete are almost certainly high-priestesses, not divinities. Other such figures depicted in the Minoan Palaces are not ‘earth mothers’ but important women of the day, dressed in the latest fashions. The important thing about these depictions, and these figures, is that they tell us much about the lives of real people, a simple fact obscured by the male fantasists, like Sir Arthur Evens, who described one terracotta woman as ‘Aphrodite.’ Sexy, yes, but real females, not chimeras 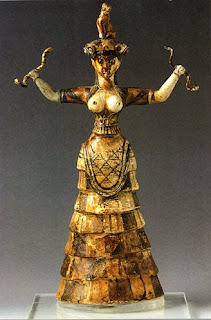