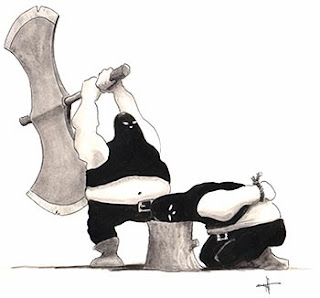 This is an answer I gave to a question centering on certain moral dilemmas.

But you already know my views on the first dimension of your question-or dilemma-so no need to travel again down beaten paths. I will just add one small caveat. For me it’s not a question of being pro-life or pro-choice. When it comes to questions of pregnancy and abortion I do not take an abstract position. I know what I would do in the circumstances I alluded to in our past discussion. I will not be dictated to, and I will not dictate to others.

The second element is pitched, I think, more at your fellow Americans, or to people that still live under a system of justice where death is the ultimate penalty. We haven’t had the death penalty in England for almost fifty years now, and I simply cannot envisage it ever returning. To me it seems positively barbaric, no matter the method. Albert Pierrepoint, the last official hangman in England, wrote an autobiography, in which he said that the death penalty was not about justice; it was about vengeance. These are his exact words;

I have come to the conclusion that executions solve nothing, and are only an antiquated relic of a primitive desire for revenge which takes the easy way and hands over the responsibility for revenge to other people...The trouble with the death penalty has always been that nobody wanted it for everybody, but everybody differed about who should get off.

Now, I do not want to misjudge you but you seem comfortable with the notion of vengeance. I am not, because I feel that it uncovers even baser emotions. But I’m talking in the abstract, am I not? That’s the very thing I said I would not do over the issue of abortion. I can’t honestly say how I would feel if someone close to me was the victim of some awful crime. I may very reach deep into notions of revenge, of a need for satisfaction in revenge.

But I note that one of your respondents has taken that final step, arguing even for drawing and quartering, even using the vilest of imagery to express her enthusiasm. I suppose it might even be a spectator sport, in the same fashion as the Middle Ages; to watch a man hung and then cut down still choking; to then have his penis and testicles cut off, his chest opened and his bowels removed, all this while alive and screaming-screams that would echo in one’s mind for as long as one was alive-, with the executioner, covered in blood, right up to his elbows, looking like a butcher. Women avoided this: they were simply burned alive. In killing monsters are we to become monsters? One Hannibal is destroyed; a dozen more arise in his shadows. Yes, it’s true: if you stare into the abyss long enough the abyss stares back into you.

As far as thinning out the herd is concerned, yes, there are some people I think should never have been placed upon this planet, but I’m mindful of the words of the Ghost of Christmas Present to Scrooge;

If these shadows remain unaltered by the Future, none other of my race,” returned the Ghost,”will find him here. What then. If he be like to die, he had better do it, and decrease the surplus population.”
Scrooge hung his head to hear his own words quoted by the Spirit, and was overcome with penitence and grief. “Man,” said the Ghost,”if man you be in heart, not adamant, forbear that wicked cant until you have discovered What the surplus is, and Where it is. Will you decide what men shall live, what men shall die. It may be, that in the sight of Heaven, you are more worthless and less fit to live than millions like this poor man's child. Oh God. to hear the Insect on the leaf pronouncing on the too much life among his hungry brothers in the dust.

Can I pose a moral dilemma for you? It’s a bit of a trap, fashioned around your personal convictions, so please avoid it if you wish. Anyway, I’m going to give you a time-machine, to take you back to Europe over a hundred and twenty years ago, to Austria, to be precise.

It’s the autumn of 1888. Twenty-eight year old Klara Pölzl is pregnant. She is delighted; this will be her fourth and, although she does not yet know it, the baby is a boy. Yes, she is delighted…and she is afraid; for, you see, she lost her previous children-two boys and a girl-in infancy. This little one, who is destined to survive, will be truly special, given all the love and devotion of which Klara is capable.

Now, your task is to persuade Klara-force her, perhaps- to have an abortion. Why? What reason would you have for so wicked an act? Well, you see, Pölzl is Klara’s maiden name: her married name is Hitler. You have the power to save millions of lives, the lives of so many children not yet born and not yet conceived; children who might very well have grown to be great people, to have discovered a cure for one or other of the dreadful diseases that still haunt the human race, or to be a great writers or artists. Could you do it; would you do it?
Posted by Anastasia F-B at 01:24