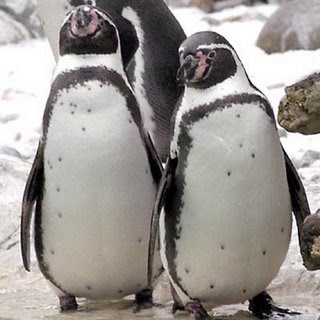 I read this story in today’s copy of The Times and I’m simply dying to share it! Apparently two homosexual Humboldt penguins in Bremerhaven zoo, northern Germany, have hatched an abandoned egg and are now raising the chick as their own. Z and Vielpunkt, both male, are seemingly happy and caring parents. The couple have been together for some time. In 2005 they were introduced to four Swedish females in an attempt to ‘cure’ them of their sexual preferences, but the two held together notwithstanding. Good for you, guys!
Posted by Anastasia F-B at 11:51