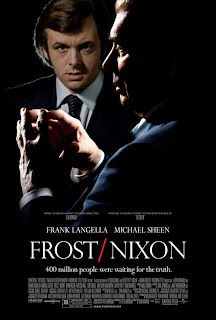 I went to see the Frost Nixon movie earlier this year. Have you seen it? Well, I simply can’t recommend it highly enough. It’s not as sweepingly effective as Oliver Stone’s Nixon, but, given the limitations of the structure-a screenplay based on a series of interviews between David Frost and ex-president Richard Nixon-it works terribly well. Essentially if follows a standard Hollywood format, with the ‘good guy’ reeling under the blows of the ‘baddie’, until he finally gets up and delivers a knock-out punch.

The key moment in the whole movie is set during the last of the interviews, that dealing with Watergate, when Nixon effectively says that the President has powers above and beyond the law, the leitmotiv of tyrants throughout history. Michael Sheen is good as David Frost, but not nearly as good as Frank Langella as Richard Nixon. Langella, I suppose, amplifies aspects of Nixon’s character that Anthony Hopkins showed in Stone’s move: the inner vulnerability, the sense of rejection and self-loathing, the great Achilles Heel of a man who in many ways was one of the most intelligent American presidents of the last century.
Posted by Anastasia F-B at 17:25