Slave Rebellions in the United States 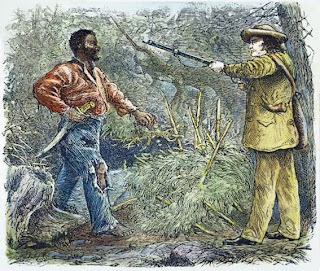 There were slave rebellions in the United States, but nothing on the scale of the Bahia Risings in Brazil, the Haitian Revolution and the Baptist War in Jamaica. The reasons why the risings in the United States were weak and sporadic is simple enough: neither demographics nor geography favoured anything more serious.

In Haiti, for example, the slave outnumbered the free population by a huge factor of eleven to one. Plantations here were the homes of hundreds of slaves, who could conspire and organise in the way their North American cousins could not. By 1860, in the southern United States, slaves accounted for less than four million of the nine million inhabitants. There were few plantations, moreover, with more than thirty slaves. The population was also relatively stable, made up of family groups who had much more to lose from insurrection. This was aided by the fact that even before the abolition of the Atlantic Slave Trade in 1807 imports of fresh slaves was in marked decline, unlike, say, Brazil.

Looking at the geographical perspective, there were few areas in the American south that could support large communities of Maroon runaways, unlike Jamaica and Brazil, where remote areas were effectively turned into guerilla bases. One has to consider also the far higher density of white people in the American south, and the existence of a transport system that allowed the rapid concentration of militia forces whenever danger threatened. There were some small Maroon communities, but they were quickly detected and destroyed. The best option for the runaway was to take refuge with pre-existing independent communities of natives. Some did indeed flee to the territories controlled by the Seminole Indians, taking part in the two Seminole Wars against the United States.

So, in short, in face of a well-armed militia, an organised system of slave patrols, an efficient road and rail network, and the absence of suitable areas in which slaves could congregate in any numbers, it is really no surprise that slave risings were small, un-coordinated and ineffective in the United States.


Even so, slavery was an issue that was bound to introduce all sorts of tensions, threatening both the stability and the integrity of the young Union. It was an issue that the North, much as it would like to, simply could not ignore. When Andrew Jackson began the aforementioned Seminole Wars, her gave priority to the destruction of a fort held by the Maroons and the 'return of the negroes to their rightful owners.'

For many in the North it looked as if the campaign in Florida was being fought specifically in the slave holding interest. Joshua Giddings, a leading abolitionist from Ohio, was later to describe Jackson's war as 'the first slave catching expedition undertaken by the Federal Government.'

Beyond that, slavery offered a challenge to notions of American liberty, in more ways than the obvious one. The existence of fugitive slaves in the north, where individual state law was based on a presupposition of freedom, created clear political and legal contradictions. When the southern states later seceded from the Union the chief motivation was held to be the defence of State's Rights.

But the irony is that it was the Fugitive Slave Acts of 1793 and 1850, guaranteeing the return of runaways by the Federal Government, which effectively undermined the very things that the northern states considered most important; namely state sovereignty, habeas corpus and due legal process. In other words, Federal action on behalf of southern slavers made it clear that, while an individual state may be free, it was still part of a Union that was not.

Increasingly the Fugitive Slave legislation was challenged in northern courts, and some states, notably Vermont, defied Federal law by passing 'personal liberty laws', which protected free blacks and obstructed the return of fugitives. In 1854 it took as many as 1000 armed police, militia and marines, supported by artillery, to escort Anthony Burns to Boston harbour, where a ship waited to carry him back to slavery through a hostile crowd of 20,000 sullen Northerners.

This was indeed a house that could not stand
Posted by Anastasia F-B at 17:29