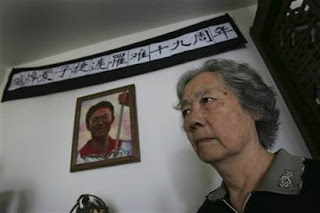 Jiang Jielian would now be thirty-seven if he had been allowed to live. I don’t suppose you have ever heard of him. Why would you? Of no great note, he was murdered along with hundreds of others by the so-called ‘People’s Liberation Army’ near Tiananmen Square twenty years ago today, 4 June 1989, the day he turned seventeen.

Jiang is likely to have been totally forgotten but for the efforts of his mother, a remarkable woman by the name of Ding Zillin, a retired philosophy professor and founder of the Tiananmen Mother’s group, an organisation which has campaigned for a true account of what happened on that day twenty years ago. In spite of the most intense intimidation and harassment, Jiang has made determined efforts to honour the memory of her son. Even her attempt to leave her house today to buy roses meant a battle with the police;

The police wouldn’t let me out of my house. I told them I would die before they could stop me.

Her aim was to place these flowers on that spot on the Avenue of Eternal Peace, some three kilometres from Tiananmen, where her son was shot. She has only been allowed to do this twice before, in 2007 and 2008, when China, like Nazi Germany in 1936, was putting on an ‘acceptable’ face to the world in the approach to the Olympics.

Ding has now disappeared, presumably to be held incommunicado until the anniversary is over. Please remember her when western governments issue hypocritical and pious statements about ‘human rights’, small coinage when it comes to business deals with repellent states and repellent political systems. Human rights are one thing when it comes to places like Zimbabwe, quite another when it comes to China. Our greed keeps these Communist brutes in power. Please, please check where a product comes from before buying; I always do. I would never buy anything made in China. 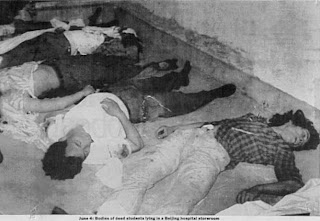