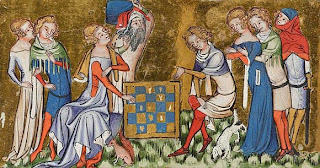 The British Library will be illuminating the dull winter months with a new exhibition of illuminations. These are not any old pictures; no, they are from the personal manuscripts of the kings and queens of England, going all the way back to the ninth century, to be shown in an exhibition called Royal Manuscripts: The Genius of Illumination.

The thing that fascinates me about this is that the illustrations in question, and the attendant text, were not simply intended as a diversion, or to focus the royal mind on less earthly pursuits, but as a sort of princely instruction manual, a list of dos and don’ts. Advice is given on whom to marry, what to eat and how to rule, all in the best possible royal tradition.

One of the most diverting, and amusing, is Secretum Secretorum, an adaptation of Aristotle’s avuncular advice to Alexander the Great. Dating from 1327, it was presented to the teenage Edward III by Walter of Milimete, a court cleric, and intended as a "guide to better kingship." Better kingship was certainly needed after the disastrous reign of Edward II, the king’s father, deposed and murdered, allegedly in a particularly gruesome manner.

Dear Walter, though, might have been in danger of an equally gruesome fate if some of the suggestions in his manuscript had been taken seriously. When it came to matters of the heart the text wags a misogynist finger: “May you never trust the works and services of women, and may you not commit yourself to them.” When one considers that the power on the throne at the time was Edward’s mother, Isabella, known as the She Wolf of France, who, with the aid of Roger Mortimer, her lover, had deposed and imprisoned her unfortunate husband, the cleric’s timing may not have been of the best.

In contrast there is 'the good woman', the sort of individual that the king would be wise to marry. She should be “beautiful in appearance, descended from a noble family, well-appointed in limbs, having an agreeable expression and an entire body well-adorned…you may have a majestic wife…with whom you may have sex as often, and when, you wish.” Now I expect Edward was waiting for that.

I’m so intrigued; I wonder if he followed the prescription given elsewhere for a stomach ache –“If you feel a pain or heaviness in your stomach and in your belly then the remedy is to clasp a hot and beautiful maiden or to place upon your belly a wide warm shirt”. Hmm, clasp a hot maiden or take a shirt - what a royal dilemma for a lusty prince. The belly ache, incidentally, is almost guaranteed by the culinary advice, which, amongst other things, suggests a delightful summer dish of veal and vinegar followed by sour apples.

Other details raise a smile with their unintentionally humorous pedantry. Nothing is omitted, even the best advice on how to sleep – “When…you have been restored by food…sleep mildly and rest for one hour upon your right side. Then turn to your left and upon that side finish your sleep, for the left side is cold and requires warming.” Yes, of course it does, but how would he know when his hour was up? Did he have a flunky ready by his side? “Wake up, your majesty; this side is done.” Not something, I think, guaranteed to improve the royal mood.

Other documents on show include the Regement of Princes, written by Thomas Hoccleve in the fifteenth century and presented to Henry V while he was still Prince of Wales. The prince was told that a “monarch is but a man for sure, and no matter how intelligent, he may err and sometimes make mistakes.”

Considering that Henry was to embark on a course of action that brought short term glory and long term disaster for the crown, it’s reasonable to assume that he was no more inclined to take advice from a commoner than any of his predecessors, especially commoners who give every appearance of veering between petty-minded, rule-obsessed bureaucrats and censorious busybodies!

The whole thing looks like being jolly good fun, provided always that you enjoy the pictures and ignore the advice, feeling sure that you are walking in royal footsteps from ages past.
Posted by Anastasia F-B at 15:47