A Lean and Hungry Look 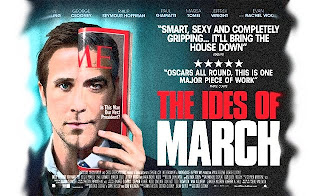 One simply knows what a political thriller entitled The Ides of March is going to be about: treachery and assassination in one form or another; it’s the fate of Julius Caesar, it’s the soothsayer’s warning, continually given and continually ignored; it’s all in the game of politics, the world’s second oldest profession.

There are no secrets to this movie: it’s a good old-fashioned morality tale, reasonably well scripted and very well directed by George Clooney, who also plays Governor Mike Morris, a Democrat hoping to secure the presidential nomination by notching up an important primary victory in Ohio, a bleeding heart-liberal enough to make bleeding heart’s bleed! He also happens to be a moral hypocrite. Ah, there’s the rub!

The Ides of March is about back-stabbing, yes, but it is also about the loss of idealism, the discovery of self-interest, the discovery that there is politics in playing politics. In the place of the white hope comes calculating cynicism, all explored through the central character; no, not through Governor Morris, but one Stephen Myers, his second best aide, brilliantly played by Ryan Gosling. Keep your eye on his steady metamorphosis, a joy and a revelation.

Based on Farragut North, a 2008 play by Beau Willimon, who worked on Howard Dean’s frustrated presidential bid, The Ides of March could easily have descended into a cliché about crushed dreams. That it did not is a clear measure of Clooney’s skill as a film maker. As drama, as a piece of theatre, it’s very well constructed, though not flawless, something I’ll come too a bit later. But the casting could not have been better, the acting impossible to improve.

For me the highlight here was Philip Seymour Hoffman as Paul Zara, Morris’ campaign manager and Myers immediate superior. I’ve loved Hoffman ever since I saw him perform the lead in Capote, the 2005 biopic based on the life of one of my favourite writers. Here he is no starry-eyed idealist like Meyers. No, he’s a hard-bitten realist but one with a strong ethical sense, loyalty being for him the highest virtue. In the end he becomes a victim, falling, Roman-style, on his sword, a sacrifice to the unscrupulous ambition of his subordinate.

Some of the minor performances are also very good, particularly Marisa Tomei playing Ida Horowicz, a reporter from the New York Times, whose friendship with Myers is as strong as her next scoop! At the beginning it is she who introduces a note of realism, warning Meyers that his hero will “let you down. They always let you down.” A message, I think, for contemporary America, or at least for all the people who were fooled for some of the time by Barack Obama.

I say that Meyers is an idealist but, in the best tradition of tragic drama, he has a flaw in his character, one that helps move the action along. The degeneration starts when he accepts an invitation to meet with Tom Duffy (Paul Giamatti), the campaign manager working for Morris’ Democratic rival. Duffy wants to bring him over, though it all turns out simply to be a Machiavellian manoeuvre of a particularly clever kind. Meyers refuses but the meeting was sin enough, the details initially withheld from Zara. The serpent is now in the garden!

The weakness in the script, the artificiality, if you like, comes with Molly Stearns (Evan Rachel Wood), an intern working on the campaign team. If we are in the garden she is Eve, she is the love interest and the temptress. Now if there is one person to stay clear of it surely has to be her. But Meyers does not and neither, for that matter, does Governor Morris. As a hook it was impossibly far-fetched. Wood’s character was completely unconvincing, oddly out of place in every sense. We are meant to believe that she is forward enough to proposition Meyers, though still naïve enough to be seduced into unprotected sex by Morris, with consequences to follow.

I suppose the part served a deeper purpose, though, exposing some of the priggish hypocrisy of American politics. In the end Meyers, now a thorough-going opportunist, even prepared to walk over the body of his lover, dead by her own hand, tells Morris in a key interview that the American electorate will tolerate lies, war and bankruptcy, but what they will not tolerate is “fucking the intern.”

In the end it’s Meyers who does all the fucking. You see, he wasn’t Brutus at all; he was Cassius, the man with a lean and hungry look. Now comes the big compromise and with that comes a deeper moral corruption. Morris in the White House will be Morris in a Whited Sepulchre.

The Ides of March is a serious film for serious people, a decent political thriller if a little lightweight at points, cerebral without being intellectual, engaging on a simple emotional level without being predictably trite. No, it’s not a great movie, but it is one that treats its audience with respect, refreshing enough in itself. Whether this was Clooney’s intention or not it’s story that should make us all a little distrustful of political purity, in whatever form it’s packaged and sold.