The Rise and Fall of an Old Reich 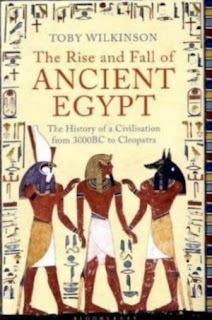 At the end of this week I’m leaving on a long planned trip to Egypt, one that will take me from the Great Pyramid at Giza in the north to the temple of Abu Simbel in the south, from Lower Egypt to Upper Egypt. And just to confuse you the former is the north and the latter the south! It’s the ancient Egyptian view of the world, you see, all upside down.

A lot of my extramural reading for the past while has been dedicated to books with an Egyptian theme, including Lawrence Durrell’s Alexandria Quartet, Olivia Manning’s Levant Trilogy (what a super and sadly neglected writer she is) and Naguib Mahfouz’s Palace Walk, the first in the Cairo Trilogy. Agatha Christie’s Death on the Nile is ready to be packed because I really want to read that sailing down the Nile. It will be yet another literary milestone for me, having read The Quite American in Saigon and Our Man in Havana in Havana!

But it’s the history of ancient Egypt that I really wanted to get close to. I know ‘bleeding chunks’ already; I imagine most people know something, even if it’s only smatterings about Tutankhamen, buried treasure and mummies curses! What I needed, though, was a decent overview, one that would take me through the whole spectrum of Egyptian history, which is precisely why I alighted on The Rise and Fall of Ancient Egypt by Toby Wilkinson.

This is a good book for a general audience, for people like me, coming to find a pattern in the pieces of a mosaic. The title is a little misleading, in that the Egypt of the pharaohs, beginning with the formation of the kingdom under Narmer in 2950BC, rose and fell and rose and fell and rose and fell, time and again. The wheel of history has never being better illustrated, from the Old Kingdom through the Middle Kingdom to the New Kingdom with several intermediate periods between.

Add to that over thirty dynasties then one begins to appreciate the sheer scale of things, the breathtaking passage of time. For me it really is sobering to think that over a thousand years separates Narmer from Ramesses II, the Ozymandius of Shelly’s poem; that Cleopatra, the final independent ruler of Egypt (actually from a dynasty of Greek interlopers), was as far removed from the founder as modern England is from the builders of Stonehenge.

At just over 500 pages Wilkinson tells his story well, in an easy and, at points, highly discursive manner. I dare say purists will find all sorts of faults but I enjoyed it. It’s the kind of book that leaves one wanting to know more, which is all to the good.

The story is a complicated one. The sheer number of rulers, dynasties, ups, downs, ins, outs and transitions tends to leave one a little breathless. I found myself continually turning back to the timeline, helpfully provided at the beginning, just to put people and events into context.

There are weaknesses. Given that religion played such an important part in Egyptian history a dedicated chapter on the main gods, forms of worship and patterns of belief would have been useful. It’s all there, certainly, but in quite a fragmented manner, scattered about like shards of pottery.

Still, all criticism aside, The Rise and Fall of Ancient Egypt served its purpose and served it well. I now have a framework in my head which will allow me to put the traces and fragments I hope see on my travels in proper context. And that is exactly what I was looking for, a handy guidebook to one of the most beguiling phases in the history of civilization.
Posted by Anastasia F-B at 16:14