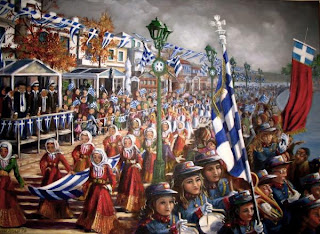 It's the most famous negative in Greek history – Epeteios tou Ohi, literally the Anniversary of the 'No', Ohi Day, celebrated every year on 28 October. It marks the occasion in October, 1940 when General Metaxas, then prime minister, rejected an ultimatum from Mussolini to allow Italian troops on Greek soil or else. He replied, in laconic Spartan style, with that single word - No!

The Euro crisis, a Greek tragedy by any measure, is now in its final act, bodies strewn across the stage, the chorus wailing in the background. Of the prologue I said over a year ago on another news blog that there was a wonderful, almost divine irony in the fact that Greece, of all places, turned out to be the Achilles' Heel of the European Union, the weak spot that may in the end lead to the death of the whole mad project of a one-size-fits-all currency.

And so it has proved. For weeks now one crisis summit of European leaders has followed hard upon another, the intervals between them getting shorter and shorter, the smiles at the end, as yet another 'solution' is announced, ever more artificial and forced. The political implication of the latest bail-out deal is something else I anticipated as long ago as February of last year:

What the Greek situation exposes is the absurdity of the whole Euro project. This was a crisis waiting to happen: a small, relatively poor country building an economy on unsupportable levels of debt but unable to manage that same economy because it is unable to mange the national currency. You see, a single currency could only ever be built successfully on a unified polity, where a central authority is able to manage just about all of those areas that fall under the prerogative of a sovereign state; where a central authority is able to advance some areas while neglecting others. The Greek crisis is set to expose not only the underlying political weakness of Europe of the Euro; it's also set to expose the limits of national freedom itself. A new bastard Union is likely to arise, increasingly authoritarian in tone; not just undemocratic but anti-democratic.

All this looked as if it was going to change, as if some resistance was about to be offered, as if Greece discovered something of its old spirit of defiance. In a remarkable development George Papandreou, the present Greek Prime Minister, looked as if he was set to take on the role of a greater Metaxas, offering his own people a say on the devil's bargain that he signed up to last week.

Nicolas Sarkozy, the French president, panicked; in the chanceries and presidential palaces of Europe there was panic over this dire threat of democracy by democracy. Abide by the rules of the Brussels deal, pocket Napoleon shouted, or leave the eurozone, an ultimatum echoed by Angela Merkel, Germany's Brass Chancellor. She had her own unique spin here, saying that Europe's leaders would "not abandon the principles of democracy. We cannot put at stake the great work of the unification of the euro."

Hmm, is this 'great work' anything like that of her Iron predecessor, which saw the emergence of the German Empire in the nineteenth century? Then it was said that the smaller states forced into Bismarck's 'great work' were like the fleas uniting with a dog. Is Greece a flea to be united with the Franco-German dog?

It would seem so, because, under intense pressure, not stopping short of financial blackmail, Papandreou has backed down. It looks as if his government will be ousted in a confidence vote to be held tomorrow in the Greek parliament. It no longer matters, now that the referendum has been abandoned. He is no Metaxas, just a bewildered and unhappy little man. There will be no opportunity for a second no day.

The Greeks are certainly at a crossroads in the long history of their nation. Perhaps in future they may have cause to reflect ruefully on a few lines of Byron;

The mountains look on Marathon---
And Marathon looks on the sea;
And musing there an hour alone,
I dream'd that Greece might yet be free
Posted by Anastasia F-B at 18:01